Well done. Look what authentic hosts in San Antonio are offering to you on 9flats. 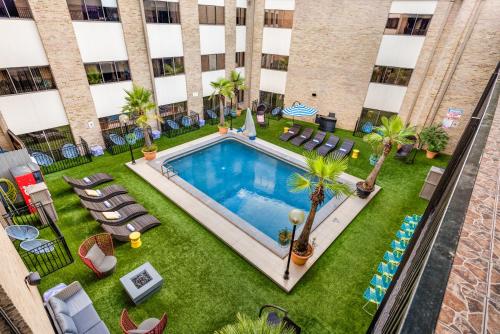 Located along the San Antonio Riverwalk, this hotel features an outdoor pool and is a 7-minute walk from Henry B Gonzalez Convention Center. Tower of the Americas is 1 km from the hotel.Book now
from $99 per night Set in San Antonio, 7.5 km from SeaWorld San Antonio, Home2 Suites by Hilton San Antonio Lackland SeaWorld offers accommodation with a fitness centre, free private parking, a shared lounge and barbecue facilities. The property is around 22 km from Ripleys Believe It Or Not Museum, 22 km from Henry B Gonzalez Convention Center and 23 km from The Alamo. The hotel has an indoor pool, a 24-hour front desk and free WiFi throughout the property.Book now
from $85 per night 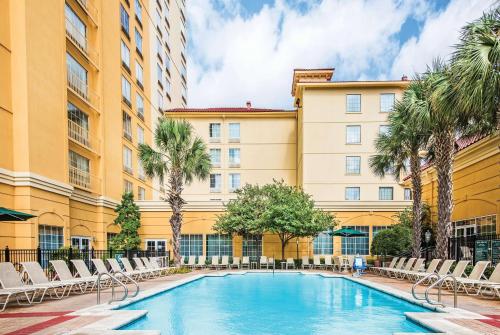 Less than 1.5 km from the San Antonio River Walk, this hotel features an outdoor pool, fitness centre and free WiFi in all rooms.Book now
from $89 per night 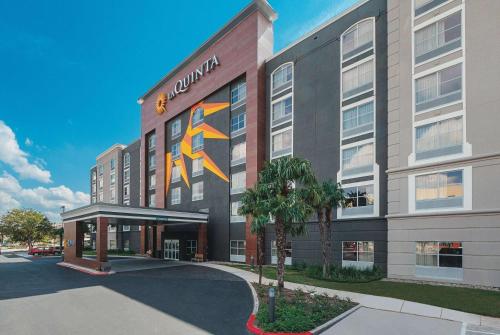 Only 1 mile from the historic Alamo, this San Antonio hotel features an outdoor pool and free Wi-Fi. Each guest room is equipped with cable TV.Book now
from $69 per night 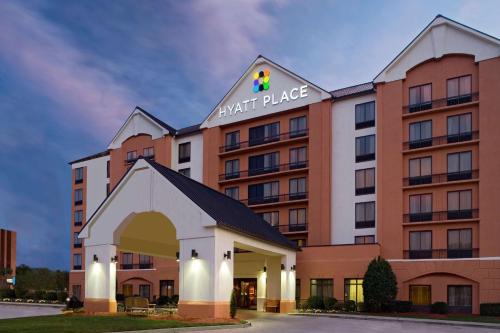 This hotel is just 10 minutes’ walk from The San Antonio River Walk, Henry B. Gonzales Convention Center and The Alamo historic site. This property features an outdoor pool.Book now
from $83 per night

Set in Schertz, within 22 km of Comal River and 23 km of Schlitterbahn Waterpark Resort, Staybridge Suites - San Antonio - Schertz, an IHG Hotel offers accommodation with a fitness centre and free WiFi throughout the property. The property is around 23 km from Comal Park, 26 km from AT&T Center and 26 km from San Antonio Spurs. The property is located 30 km from Ripleys Believe It Or Not Museum and 31 km from Henry B Gonzalez Convention Center.Book now
from $99 per night 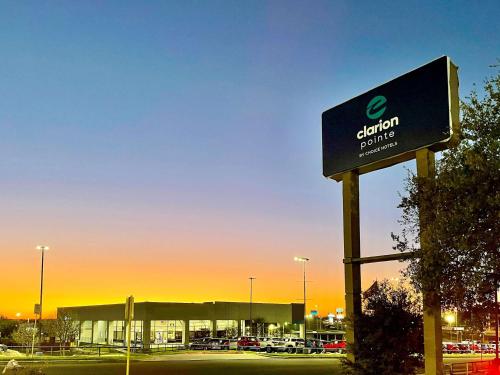 Located in San Antonio, Texas, this hotel is 11 miles from Seaworld and Lackland Air Force Base. It features an outdoor pool and guest rooms with free Wi-Fi.Book now
from $78 per night 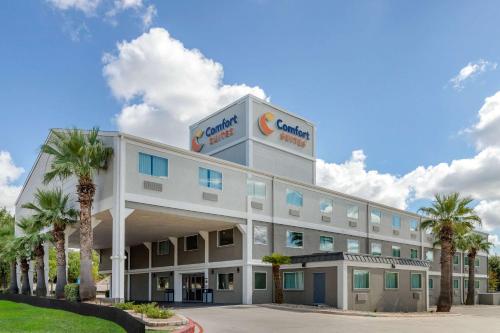 Comfort Suites Hill Country Village, is located in the heart of San Antonio. The hotel is three miles from the San Antonio International Airport and is the perfect location for the San Antonio visitor. The hotel is only 12 miles from downtown, where you can enjoy the world-famous San Antonio River Walk, the Alamo, the Alamodome and the Rivercenter mall. Six Flags Fiesta Texas and SeaWorld San Antonio theme parks are only a short distance away. A complimentary hot breakfast is provided daily.Book now
from $68 per night 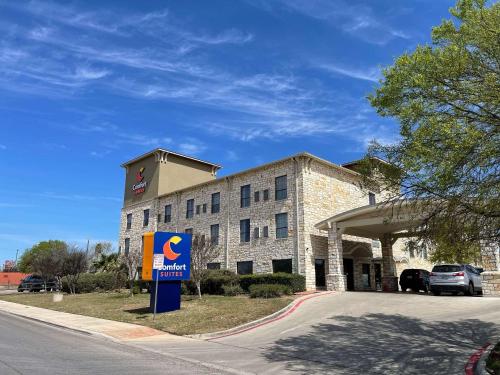 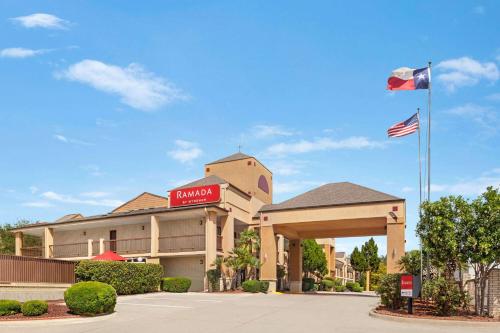 Located off Interstate 410 this San Antonio hotel is 8 km from SeaWorld. The hotel features spacious rooms with free WiFi, a hot breakfast and an outdoor pool.Book now
from $78 per night Ideally situated in the North San Antonio - SAT district of San Antonio, Hilton Garden Inn San Antonio-Live Oak Conference Center is situated 21 km from AT&T Center, 22 km from San Antonio Spurs and 25 km from The Alamo. Among the facilities of this property are a restaurant, a 24-hour front desk and room service, along with free WiFi throughout the property. The hotel has family rooms.Book now
from $89 per night 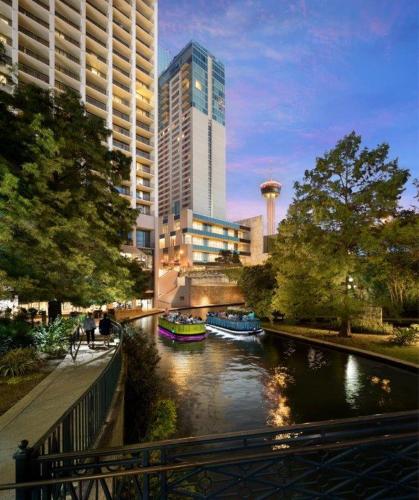 Grand Hyatt San Antonio River Walk, a family friendly hotel near the Alamo, is pleased to offer an exceptional dining value at all their downtown restaurants. Each child accompanied by a registered hotel guest will dine for free with the purchase of an adult entrée.Book now
from $126 per night

See all 1514 accommodations in San Antonio

San Antonio has a population of about 1.5 million inhabitants, 2.5 million considering the entire metropolitan area (Greater San Antonio) and is the 24th largest metropolitan area in the United States and the third largest in Texas. It has an extension of 1205.4 km² and an altitude of 198 meters above sea level. Its location gives it a humid subtropical climate, with an average minimum temperature of about 15 degrees and a maximum of 27 degrees.
It’s also known as “Alamo City”, because of the colonial Alamo mission that is located in the city, although often the mission is (mistakenly) called “strong” (Fort Alamo).
Together with the cities of Dallas and Houston, forms the Texas Triangle, one of the eleven mega-regions of the United States of America. Including also the capital Austin, forms the Texaplex (term borrowed from metroplex).

Finding your own San Antonio

Beautiful nature landscapes, art museums, historical missions and amusement parks. This mix of ingredients attracts around 30 million visitors every year. Not forgetting the excellent restaurants
San Antonio is definitely the city that most embodies the “Texan” spirit. that mixture of Spanish and Mexican inheritance that permeates the social fabric of Texas everywhere, but which is more alive here than elsewhere.
Whether you want to visit the “Alamo”, the famous site of the famous battle of 1836 where Davy Crockett and Jim Bowie lost their lives, or you want to attend the “Fiesta”, the main annual event held in the city, San Antonio will always offer you something unique. All accommodation, from hotels to holiday homes and apartments, can be booked with a simple click on 9flats.com.

What to visit in San Antonio

There are many areas, zones, neighbourhoods and districts to visit during your stay in San Antonio. In 9flats you can find the best cheap accommodations, hotels and vacation rentals in the entire Great San Antonio. We recommend you:

In the central Alamo Plaza, stands the “Mission de San Antonio de Valero” better known as “The Alamo” or “Fort Alamo”. Born mainly as a Spanish colonial mission thanks to Brother Antonio de Olivares and the native Payaya natives, the mission was transformed into a defensive stronghold against Mexican attacks. Famous is the battle that took place here in 1836. For thirteen days the Texan and Mexican troops fought to the death. The Mexican troops, led by General Santa Anna, got the better of the Texan troops and, during the fighting, the legendary Davy Crockett lost his life. Admission is free.

One of the largest and most important zoos in the US, with more than 3500 animals of 750 different species. There is also a nice little train that tours the zoo. It’s located at 3903 N St Mary’s St, San Antonio, TX 78212.

The real heart of the city, this beautiful promenade along the banks of the San Antonio river, will entertain you with the many restaurants, cafes and bars scattered along the way. The typical smells of Tex-Mex cuisine will envelop you and you will be cheered by the notes of the Mariachi and the many street artists.
You can also take a boat ride on the river or even mini cruises.

To the south of the city, there are ruins of four 18th century Spanish missions. Grouped in one large park, the ruins of San José, San Juan, Conception and Espada, offer an interesting and unique glimpse of what life in the Wild West was like at the time of Spanish colonization.

Tower of the Americas

A 230-high tower that stands right in Downtown. Perfect to enjoy a unique panoramic view of San Antonio, and to eat at the revolving restaurant located on the top floor of the tower. It is located at 739 E. Cesar E. Chavez Blvd. San Antonio, TX 78205

Other attractions in San Antonio:

There are many attractions, both fixed and not, to visit in this beautiful city. We suggest:

Annual event held in San Antonio. In fact, it’s the biggest holiday in the state of Texas. It lasts 10 days, starting at the end of April, and includes over 100 different events. A great mix of color, people and fun.

One of the most important moments of the entire panorama of activities in San Antonio. There are many side events such as the cow lasso and slalom race between the barrels, but the “main event” is undoubtedly the bull riding race.
There is also a nice cattle auction. Here you can watch the “longhorns”, the famous Texas long horned cows. Here you can breath the pure and original country western atmosphere.

You can bet to find your best deals on San Antonio hotels on 9flats, with minimum effort. From San Antonio you can easily flight to other wonderful destinations. What about a unique holiday rentals in New Orleans, a cheap hotel in Phoenix or a central apartment in Nashville ? 9flats.com offers vacation homes all over the world, so whether it’s vacation homes in Los Angeles or a dream of a chic Paris guest house, there is certainly something for everyone.