Well done. Look what authentic hosts in New Orleans are offering to you on 9flats. 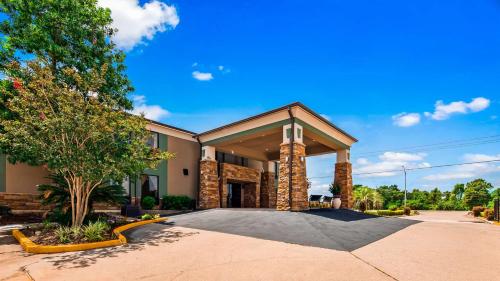 Located across the street from Bayou Segnette State Park, this Westwego hotel is 23.3 km from Bourbon Street. It features an outdoor pool, hot breakfast and rooms with free WiFi.Book now
from $83 per night

Ideally situated in the Downtown New Orleans district of New Orleans, Sonesta New Orleans Medical Center is situated less than 1 km from St Louis Cemetery No 1, a 13-minute walk from Bourbon Street and 1.3 km from Mercedes-Benz Superdome. Featuring a fitness centre, the 4-star hotel has air-conditioned rooms with free WiFi, each with a private bathroom. Private parking can be arranged at an extra charge.Book now
from $84 per night 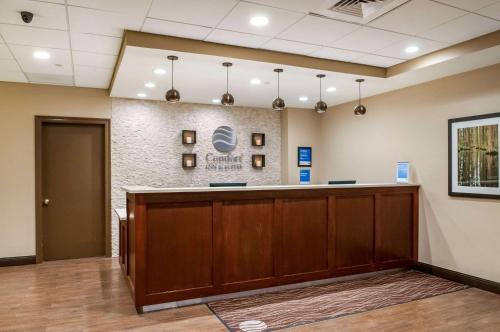 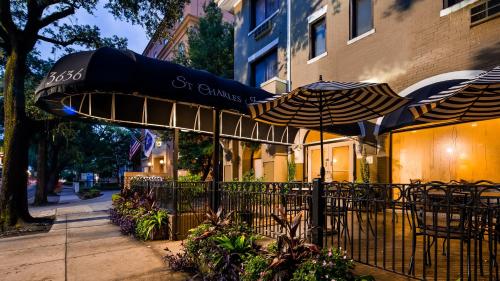 This New Orleans hotel is located in the Garden District, 10 minutes from the French Quarter. The hotel offers a continental breakfast, free Wi-Fi and free on-site parking.Book now
from $99 per night 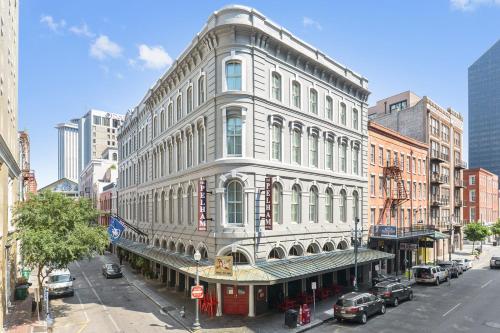 Harrah’s Casino and the French Quarter district are within a 5-minute walk of this New Orleans hotel. Pelham offers on-site dining, free WiFi, and rooms with a flat-screen cable TV.Book now
from $72 per night 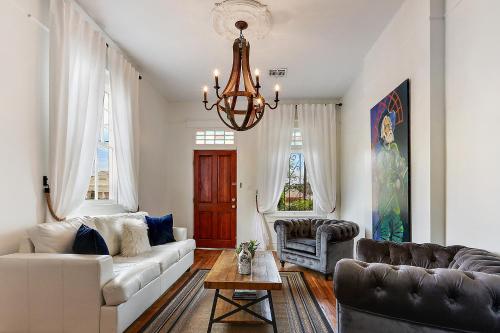 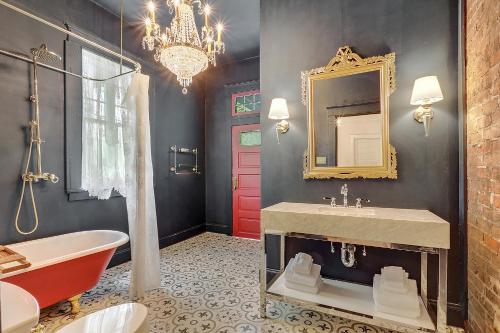 Located in New Orleans, 3.3 km from St Louis Cemetery No 1 and 3.7 km from Bourbon Street, 2bd French Luxury w/ courtyard provides air-conditioned accommodation with a patio and free WiFi. The property is 7 km from Lafayette Cemetery and 10 km from Uptown New Orleans Historic District.Book now
from $120 per night 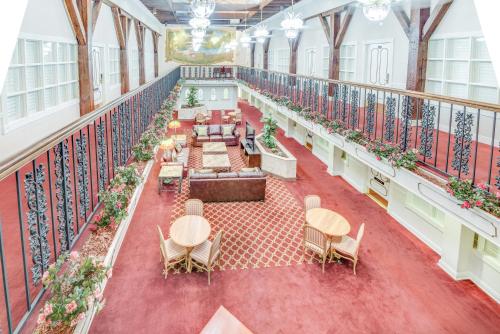 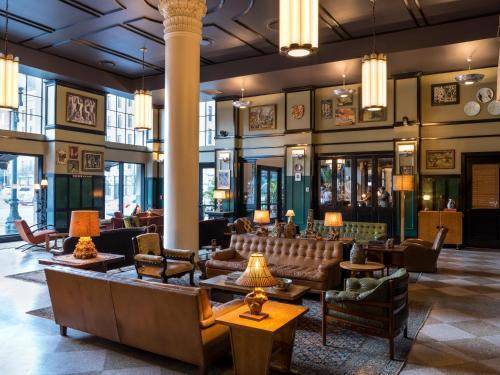 Located in the Warehouse District of New Orleans, within a 5-minute walk to Harrah's Casino, Ace Hotel New Orleans boasts a rooftop bar and award-winning restaurant. The hotel has a seasonal outdoor pool, fitness centre, and guests can enjoy live music on-site.Book now
from $104 per night 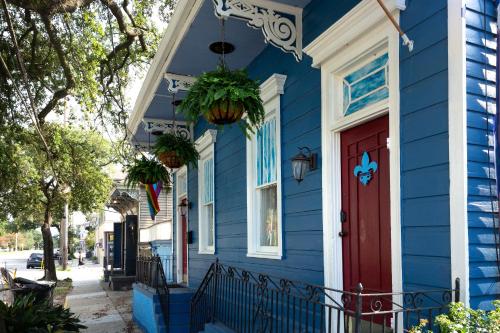 Offering a patio and jet spa, Blue60 Guest House is situated in New Orleans, 1.3 km from St Louis Cathedral.Book now
from $104 per night AC Hotel by Marriott New Orleans Bourbon/French Quarter Area offers a rooftop terrace. Guests can enjoy free Wi-Fi in all rooms. This hotel is located just steps away from Bourbon Street and the historic French Quarter.Book now
from $83 per night

See all 1728 accommodations in New Orleans

Located on the banks of the Mississippi River, New Orleans has a population of about 400,000 inhabitants, 1,300,000 considering the entire metropolitan area. This makes it the most populous city in Louisiana and 46th in the USA.
Surely New Orleans represents one of the most fascinating and special destinations of the U.S. and this is not only for the presence of the famous “French Quarter” and the unique mixture of food and music. French and Spanish influences have dominated the 250 years of history of the city giving it 100 faces and facets that characterize it today.

Finding your own New Orleans

Also called “the city forgotten by worries,” New Orleans over the decades has earned a reputation as a city of excesses and strains. The beating heart of New Orleans, its oldest core, is certainly the French Quarter, with its famous Bourbon Street: a very characteristic street, dotted with bars and strip clubs. The whole French Quarter is a succession of shops, live music, restaurants, hotels and galleries. But the city deserves to be turned far and wide, to merge with its soul, to live it, to breathe it.
New Orleans, the home of Jazz and Cajun cuisine. Two essential aspects of the city. On 9flats you can find beautiful accommodations in private houses or in beautiful hotels in New Orleans.

What to visit in New Orleans

There are many areas, zones, neighbourhoods and districts to visit during your stay in New Orleans. In 9flats you can find the best cheap accommodations, hotels and vacation rentals in the entire New Orleans area. We recommend you:

The area most visited by tourists. Despite its name, the architecture here is in Spanish style: large windows overlooked by arches and lunettes. The main street of this district is Royal Street, characterized by houses with wrought iron balconies and buildings that recall Greek architecture. But the most famous street is undoubtedly Bourbon Street, with its bars, strip clubs, street artists, jazz clubs and Cajun restaurants. Book a vacation rental in this beautiful area

Magnolia trees and superb oaks frame the streets of this district, overlooked by a multitude of houses and buildings of different styles. The lush gardens of St. Charles Avenue are the perennial spectators of the Mardi Gras parade that passes through here. Also worth a visit is the Lafayette Cemetery, very beautiful and surrounded by greenery, with tree-lined streets. Walk along Magazine Street for shopping and to visit the many antique shops and, of course, to taste the typical Cajun cuisine in one of the many restaurants, cafes and bars. The whole neighborhood is considered to be a heritage of national history and preserved by architectural protection laws. Booking an apartment, bed and breakfast or holiday home here means living fully in the spirit of New Orleans.

Immense park of 1300 hectares, right in the heart of the city. Miniature trains and a vintage carousel. It also includes the New Orleans Museum of Art, the Bestoff Sculpture Garden, the Botanical Garden and one of the largest series of oak trees in the world. In short, a real paradise.

Other attractions in New Orleans

Surely you must mention Mardi Gras. It’s not a neighborhood but the biggest free party in America: it’s the Mardi Gras party, which here in New Orleans lasts almost a month. Parades, parades, parades, masks and transgression, all at once.
Celebrations generally begin after the Epiphany and last until Mardi Gras Day, Mardi Gras Day. More than four million people flock to the city where, in those days, confusion reigns. The best time of Mardi Gras is the last week of the festivities, when the festivities come alive and joy, parades and transgression reign supreme.

Another great event in New Orleans, celebrates the musical and cultural roots of the city. It takes place on the last weekend in April and the first weekend in May. A unique event with incredible lines up and a unique mood and rhythm. It´s second only to the Mardi Gras festival.
There are also two large areas dedicated to gastronomy so much so that you can say that Jazz Fest is also a food festival: much or almost everything revolves around typical Cajun cuisine.

What to eat in New Orleans

The city’s gastronomy certainly reflects the history of the people of New Orleans. A melting pot of French, Native American, Spanish and African settlers. A mix that has generated a unique and unrepeatable style. Generally the ingredients are poor and the spices abundant. To try:

You can bet to find your best deals on New Orleans hotels on 9flats, with minimum effort. From New Orleans you can easily flight to other wonderful destinations. What about a unique apartment in Miami, a cheap hotel in Dallas or a central apartment in Chicago ? 9flats.com offers vacation homes all over the world, so whether it’s vacation homes in Los Angeles or a dream of a chic Paris guest house, there is certainly something for everyone.