Well done. Look what authentic hosts in Tel Aviv-Kerem Ha-teimanim are offering to you on 9flats. 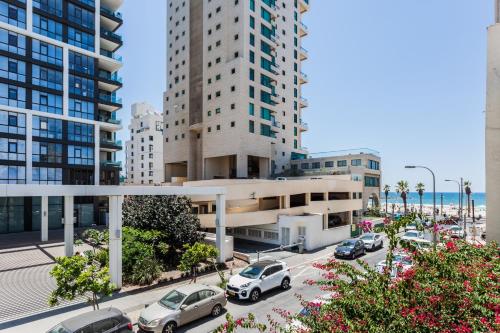 Sweet Home On The Beach

Sweet Home On The Beach has air-conditioned guest accommodation in the centre of Tel Aviv, 300 metres from Aviv Beach, 400 metres from Banana Beach and 400 metres from Jerusalem Beach. Complimentary WiFi is available throughout the property.Book now
from $92 per night 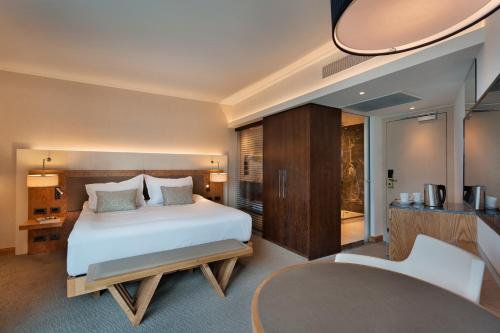 With panoramic views over Tel Aviv and the Mediterranean Sea, the Isrotel Tower Hotel offers a rooftop pool and free WiFi. It has air-conditioned rooms and suites, complete with a satellite flat-screen TV.Book now
from $120 per night 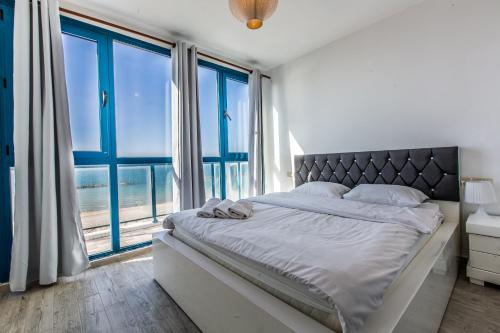 M Sea Suites - By The Beach

Situated 200 metres from Aviv Beach and 300 metres from Jerusalem Beach in the centre of Tel Aviv, M Sea Suites - By The Beach features accommodation with free WiFi and free private parking.Book now
from $192 per night 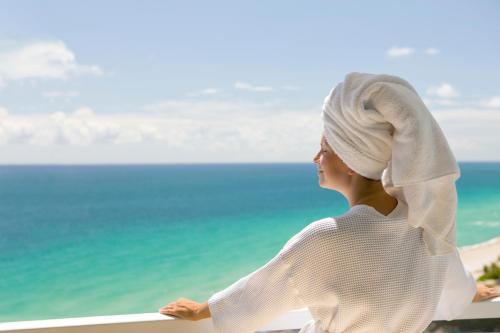 Herbert Samuel By The Beach

Set within 700 metres of Nachalat Benyamin Crafts Fair in Tel Aviv, Herbert Samuel By The Beach offers accommodation with free WiFi, a seating area, a TV and a kitchen.Book now
from $142 per night 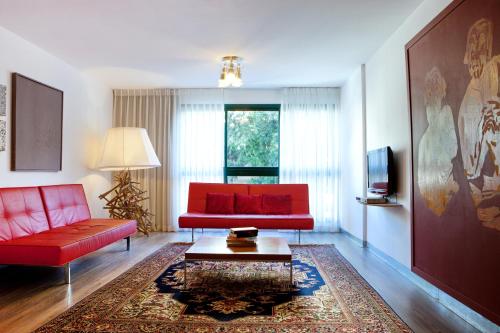 Located next to Tel Aviv's trendy Rothschild Boulevard, Diaghilev LOFT live art hotel is set in a historic building and offers large lofts with free Wi-Fi. There is an on-site contemporary art gallery and the hotel's cafe often hosts art events.Book now
from $111 per night 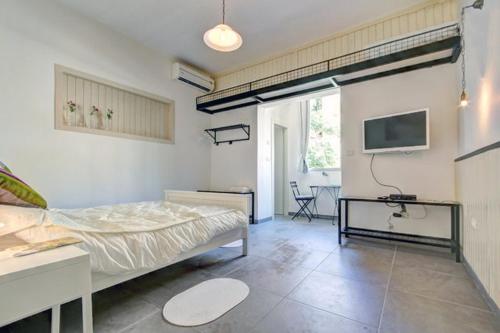 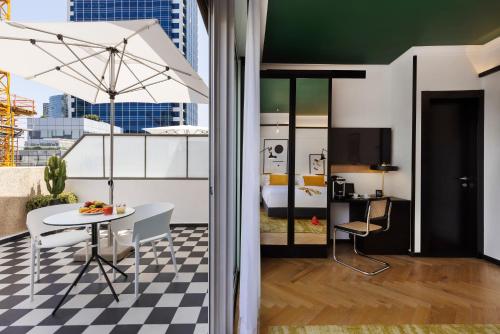 Situated in Tel Aviv, Theodor Brown Tel-Aviv, a member of Brown Hotels features express check-in and check-out, non-smoking rooms, free bikes as well as free WiFi is available throughout the property.Book now
from $85 per night 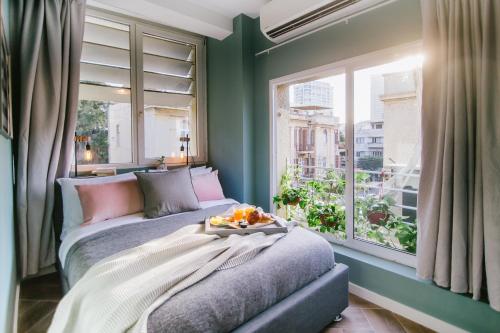 Monochrome - an Autonomous Hotel by Loginn

Monochrome - an Autonomous Hotel by Loginn features free WiFi throughout the property and views of city in Tel Aviv. This property is set a short distance from attractions such as Independence Hall Museum, Suzanne Dellal Center for Dance and Theater, and Shenkin Street. The property is 1.3 km from the city centre and 1.2 km from Aviv Beach.Book now
from $85 per night 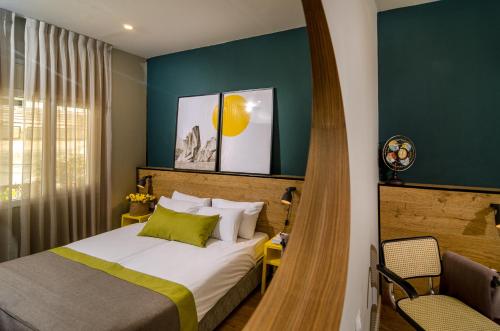 Located on Dizengoff Square, a 10-minute walk from the beach, White House offers accommodation in a historical building in the centre of Tel Aviv. Free WiFi access is available. The Dizengoff Centre Shopping Mall is 5 minutes' walk away.Book now
from $85 per night 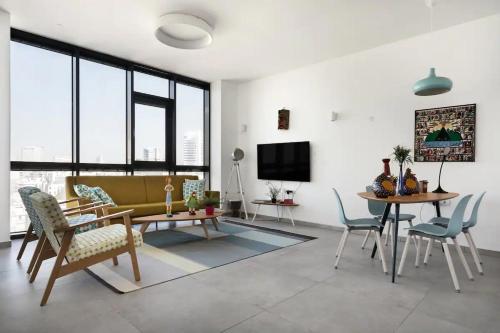 Luxury 2 Bedroom By The Beach in Central Tel Aviv

Right in the centre of Tel Aviv, Luxury 2 Bedroom By The Beach in Central Tel Aviv has city views from the balcony. This beachfront property offers access to a terrace, free private parking and free WiFi.Book now
from $85 per night 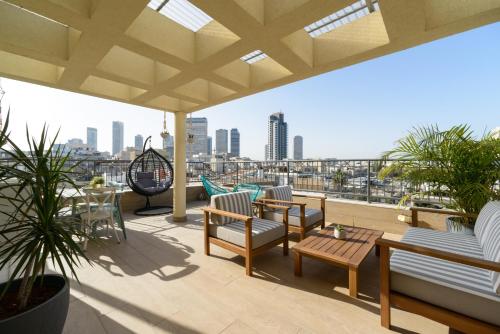 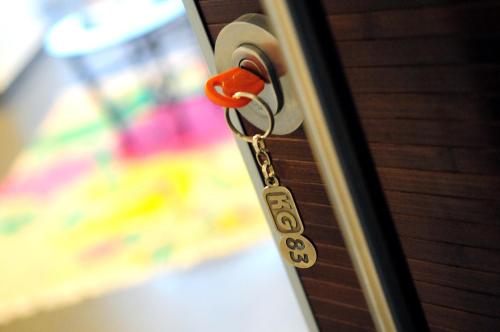 Set on Tel Aviv's lively King George Street, this property offers ultra-modern apartments with a bright design, free Wi-Fi and full kitchens. You will also find a flat-screen TV with DVD player.Book now
from $85 per night

Kerem Ha-teimanim is a predominantly residential neighbourhood in the Israeli capital of Tel Aviv. It takes its name from its great heritage of wine production; a fact this is demonstrated by the English translation of Kerem Ha-teimanim – ‘Vineyard of the Yemenites’. This lively part of town is filled with street cafes and many examples of classic Jewish customs. Indeed, it is widely believed that the neighbourhood is the home of the largest Jewish community in the world. Such a rich history and culture is best observed at close-quarters, and what better way to do that than by staying in your very own holiday apartment in Kerem Ha-Teimanim?

Despite a medieval look, the main areas of the neighbourhood were built in the late 19th century. The district has the honour of being the first area of Tel Aviv to be built outside the picturesque port of Jaffa. Unlike other parts of this great city, life is calm and relaxed. Whilst much of Tel Aviv has modernised, this picturesque neighbourhood has its roots still planted in a bygone age, and that makes it truly unique within the relatively young nation of Israel. Replete with beautiful buildings and charming side streets, the best way to enjoy a trip to Kerem Ha-teimanim is by renting a holiday apartment in Tel Aviv. Properties on the 9flats website are clean, well-equipped and filled with all the creature comforts you’re probably used to at home.

See the Real Community with Holiday Accommodation in Kerem Ha-teimanim

Whilst this pretty neighbourhood is a picture of tranquility, it is surrounded by the hustle and bustle of modern city life. The Carmel Market and the popular Allenby Street are real hives of retail activity. Local traders sell locally produced goods of all descriptions, and bargaining skills could allow you to pick up a few bargains! Located only a short walk away is Kikar Magen David – and area of the city where culture and history can be seen at every turn. There is no doubting that this part of Tel Aviv is steeped in history and many years of culture. Immerse yourself in local life by renting holiday accommodation in Florentine via the 9flats website. Because most of the properties on the 9flats website are located in genuine residential neighbourhoods, you will get the chance to live side-by-side with local people – the only way to get an authentic glimpse of local cultures and customs.

If you’re currently considering couchsurfing in Kerem Ha-teimanim as a way of saving money and seeing the real Tel Aviv, take a look at the 9flats website first. The service is similar to the couchsurfing phenomenon, but it adds the element of luxury. It also means you can rent an entire property without the need to share with others.