Well done. Look what authentic hosts in San Sebastian are offering to you on 9flats. 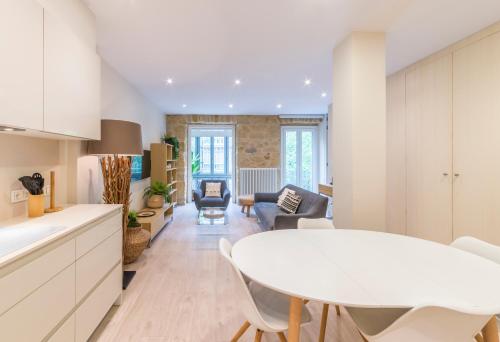 In the San Sebastian City-Centre district of San Sebastián, close to La Concha Beach, Apartamentos Bellas Artes features free WiFi and a washing machine. This apartment is 1.3 km from Victoria Eugenia Theatre and 1.7 km from Calle Mayor.Book now
from $83 per night 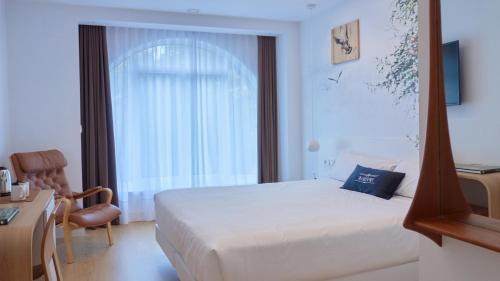 300 metres from Zurriola Beach, Boulevart Donostia is situated in San Sebastián and features free WiFi, express check-in and check-out and concierge services. The property is set less than 1 km from Victoria Eugenia Theatre, a 15-minute walk from La Concha Promenade and 1.9 km from Kursaal Congress Centre and Auditorium. The guest house has family rooms.Book now
from $83 per night 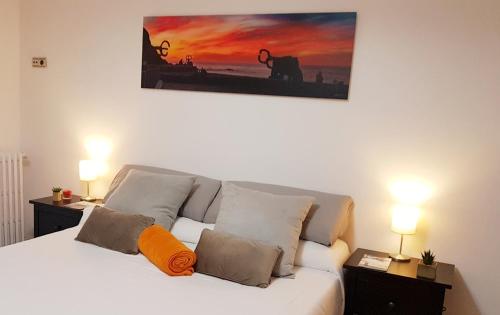 Situated within the San Sebastian City-Centre district in San Sebastián, URBIETA CENTRO has air conditioning, a balcony, and city views. This property offers access to a patio, free private parking and free WiFi.Book now
from $83 per night 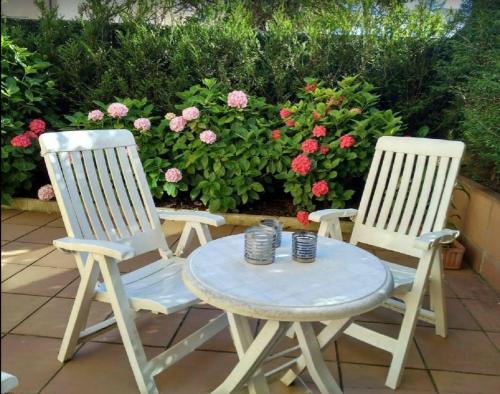 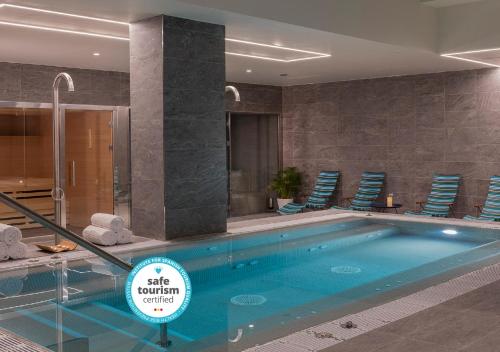 Axel Hotel San Sebastián - Adults Only in San Sebastián provides adults-only accommodation with a seasonal outdoor swimming pool, a fitness centre and a bar. Boasting a sun terrace, this property is set a short distance from La Concha Beach, Ondarreta Beach and Zurriola Beach. The accommodation offers a 24-hour front desk, room service and luggage storage for guests.Book now
from $83 per night 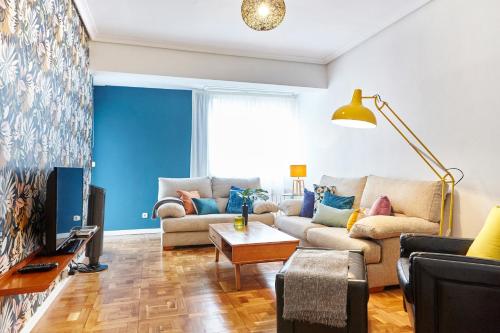 In the Amara district of San Sebastián, close to La Concha Beach, SALABERRIA APARTMENT with private garage features a terrace and a washing machine. This apartment offers free private parking, a 24-hour front desk and free WiFi.Book now
from $349 per night 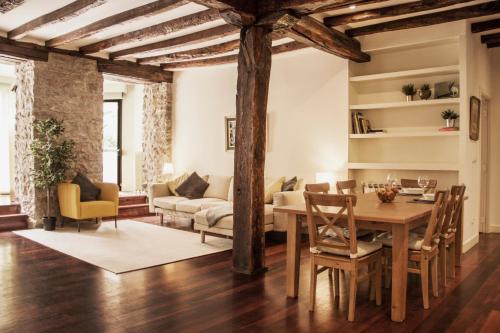 Located just 250 metres from La Concha Beach, Central, Spacious and Authentic Family Apartment provides accommodation in San Sebastián with access to a shared lounge, a terrace, as well as a shared kitchen. This apartment offers accommodation with a patio.Book now
from $83 per night 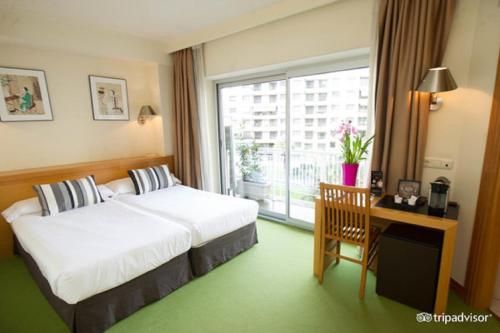 The Zaragoza Plaza Hotel is set in the centre of San Sebastian and 50 metres from La Concha Beach. Air-conditioned rooms have private bathrooms.Book now
from $83 per night 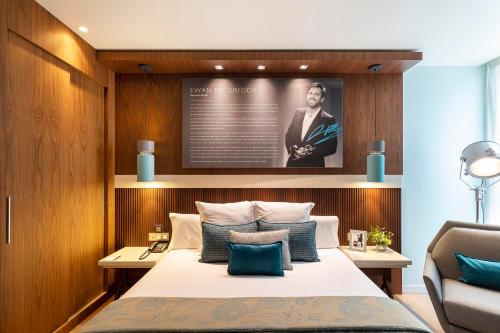 The Zinema7 is themed around cinema and the San Sebastian Film Festival. Each room offers free Wi-Fi, flat-screen TV’s and is dedicated to an actor or director who has visited the city.Book now
from $83 per night 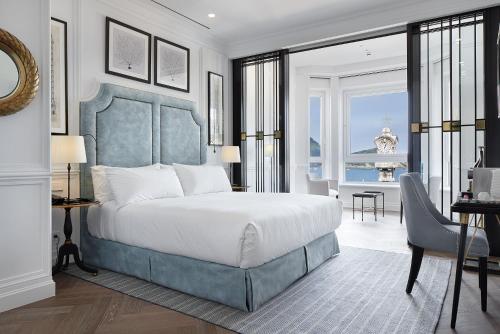 Hotel Boutique Villa Favorita in San Sebastián provides adults-only accommodation with a bar and a terrace. Among the facilities of this property are a restaurant, a 24-hour front desk and room service, along with free WiFi throughout the property. Private parking can be arranged at an extra charge.Book now
from $83 per night 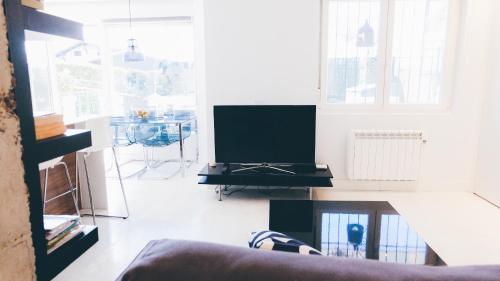 Boasting a garden and a terrace, APARTAMENTO ROMANTICO FREE PARKING WIFi provides accommodation in San Sebastián with free WiFi and city views. Featuring free private parking, the apartment is in an area where guests can engage in activities such as hiking and fishing.Book now
from $83 per night 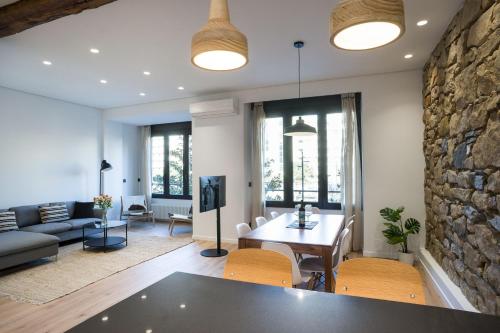 See all 1101 accommodations in San Sebastian

San Sebastián, the capital of the Spanish province Gipuzkoa, is officially called Donostia/San Sebastián. It is only about 20 kilometres from the French border and lies on the famous Bay of Biscay, the declared holiday destination of visitors from all over the world. Great beaches, a varied landscape and many interesting large and small towns promise a relaxing holiday. Therefore, in the high season rooms and apartments in San Sebastián are understandably quickly booked up. In order to present you with as wide a choice as possible, we also have accommodation in different parts of the city as well as in the immediate vicinity and offer, for example, private holiday apartments in Loyola and apartments in Zubieta. If you prefer to live on the French side, you will find private Accommodations in St.-Jean-de-Luz or Hendaye. Couchsurfing in San Sebastián is not part of our program because we believe that holidays are only really relaxing if you can use your accommodation for yourself and don’t have to share it with hosts or other guests.

Apartments in San Sebastián, European Capital of Culture in 2016

There are many ways to get to your apartment in San Sebastián: For example, you can fly to Bordeaux and drive by rental car along the coast via St.-Jean-de-Luz. Or you can take a flight to Bilbao, about 100 kilometres west. In any case, you should take a rental car, because the area around San Sebastián is a great destination if you want to relax your beach holiday with excursions. Since San Sebastián not only has a lot to offer historically, but is also a very modern and open-minded university city, it presents numerous platforms for spectacular events. Every year in July the Jazzaldia takes place, a jazz festival that was founded in 1966. The San Sebastián International Film Festival has been held since 1953 and attracts not only celebrities from the film industry to the city. International pyrotechnicians meet at the Semana Grande Donostiarra, the week in August where they present their fireworks. Numerous concerts, theatrical performances and horse races accompany this colourful spectacle, which also includes Basque cuisine, for which San Sebastián is the famous synonym. It is best to take your time to enjoy events, nightlife and parties, as well as the great dishes typical of the region.

Around the private apartment in San Sebastián

From your private apartment in San Sebastián you can start off on wonderful excursions to the spectacular beaches and bizarre cliffs. If you drive inland, you will have a fantastic view of the bay of La Concha and San Sebastián. You might even recognize one of the many buildings you have already seen at close range. You should definitely look at the pilgrimage church La Antigua, which is located in Zumarraga or, in Azpeitia, the Loiola Basilica. In contrast, the shrine of Arantzazu, which was reconstructed after many fires and reopened in 1955, seems somewhat more avant-garde. Reserve enough time for a trip to the biggest city of the Basque Country, or book an Apartment in Bilbao, if you prefer to spend several days there.