Well done. Look what authentic hosts in Blackpool are offering to you on 9flats. 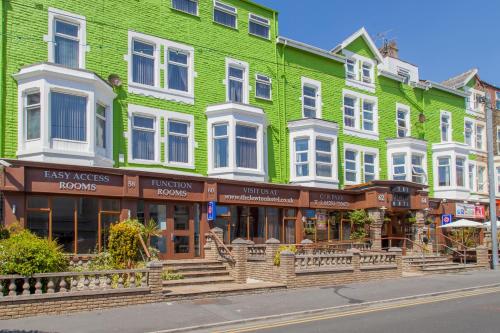 With a large car park and free WiFi, this hotel has a traditional restaurant and lively bar. The Lawton is situated in Blackpool centre, just a 5-minute walk from The Promenade.Book now
from $83 per night 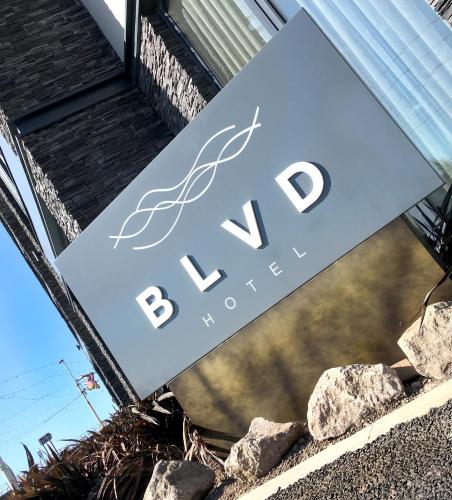 Boulevard Hotel is located in Blackpool, adjacent to Blackpool Pleasure Beach, and offers free WiFi. Located in the South Shore district, the property provides guests with access to a fitness centre. The accommodation provides a 24-hour front desk.Book now
from $83 per night 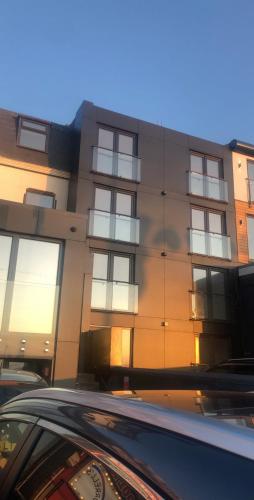 Located 100 metres from Blackpool South, ApartHotel421 by Seafront Collection provides accommodation with a bar, a shared lounge and an ATM for your convenience. Complimentary WiFi is featured throughout the property and private parking is available on site.Book now
from $83 per night 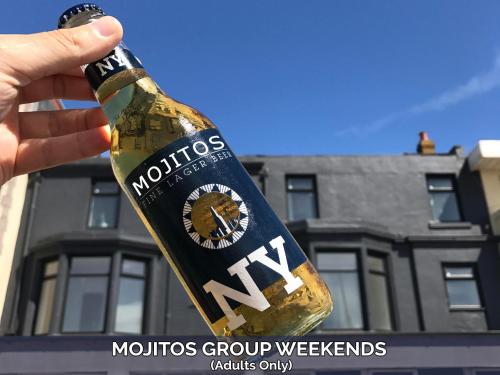 Mojitos Group Weekends Blackpool in Blackpool provides adults-only accommodation with a bar and a shared lounge. Popular points of interest nearby include Coral Island, Blackpool Tower and South Pier. Private parking is available on site.Book now
from $83 per night 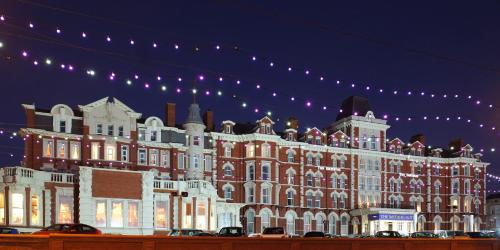 The Imperial Hotel Blackpool is in the quieter North Shore area. The North Pier is 1,000 yards away and there are trams to all the attractions. Blackpool North Rail Station is 900 yards away.Book now
from $83 per night 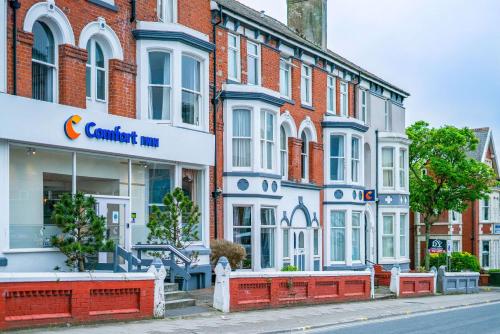 Comfort Inn Blackpool Gresham is just 10 minutes’ walk from Blackpool’s seafront, the Tower and Illuminations. Set 500 metres from the beach, this traditional hotel features a restaurant and a bar.Book now
from $83 per night 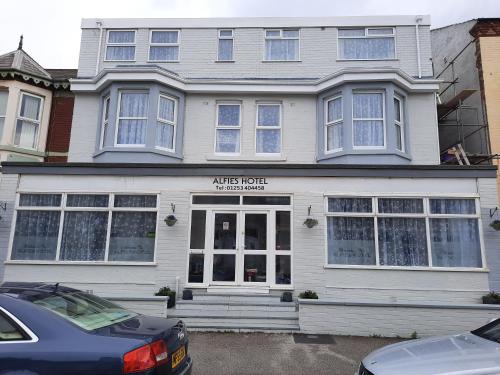 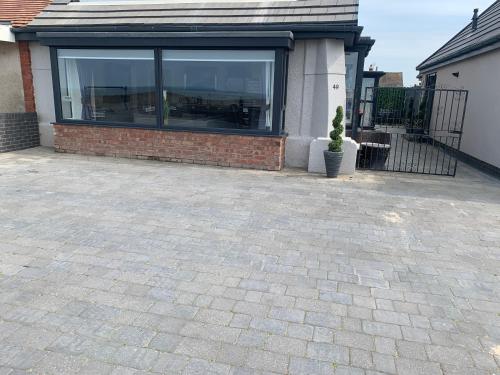 Beach House Apartment on ground floor with sea view - pet friendly is located in Cleveleys. The accommodation is 21 km from Lytham St Annes, and guests benefit from complimentary WiFi and private parking available on site.Book now
from $144 per night 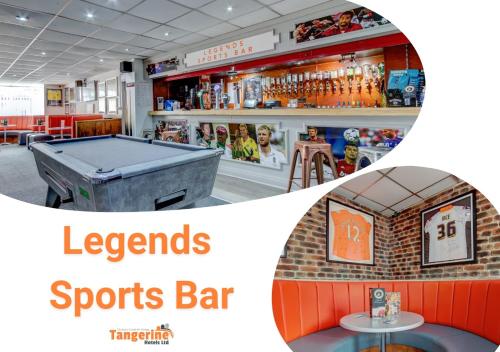 The Sandringham Court Hotel & Legends Public Sports Bar, Blackpool is located in Blackpool and boasts, a bar and a games room. The hotel offers free WiFi access in public areas and guests benefit from on-site public parking facilities.Book now
from $83 per night 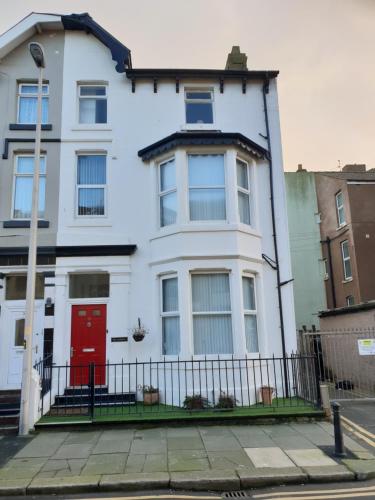 In the Blackpool Centre district of Blackpool, close to Blackpool Central Beach, The Bromley Central Holiday Home - Part of the Blackpool Resort Collection has a terrace, free WiFi and a washing machine. Featuring private parking, the holiday home is 500 metres from Blackpool South.Book now
from $83 per night 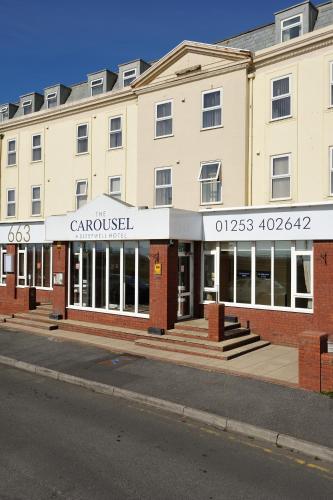 Graded by the AA as Blackpool’s highest-rated 3-star hotel, the beautifully refurbished Carousel on Blackpool’s seafront has a restaurant, free WiFi. It is 10 minutes’ walk from the Pleasure Beach.Book now
from $83 per night 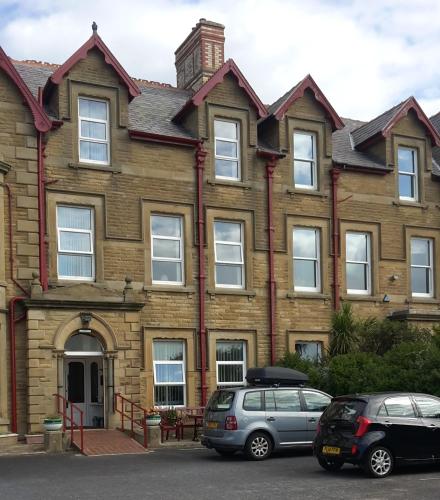 Situated in Lytham St Annes in the Lancashire region, with St Annes Beach nearby, Manhattan Lodge features accommodation with free WiFi and free private parking.Book now
from $83 per night

See all 1144 accommodations in Blackpool

The town of Blackpool in north-west England rose to prominence during the 19th century, as changes to UK labour laws made provisions for paid holidays. The huge expanse of coastline and spacious beaches meant that Blackpool quickly became the UK’s number one tourist destination. More than one hundred years after Blackpool’s heyday, the famous resort is still Britain’s most popular seaside destination – welcoming an incredible 12 million visitors every year. By renting a holiday apartment in Blackpool, you can immerse yourself in the party atmosphere that surrounds this great town throughout the year.

Escape from the Tourist Throngs with Holiday Apartments in Blackpool

One of the town’s major attractions is Blackpool Illuminations; a time of year (usually between October and December) when a dazzling array of brightly coloured lights adorn the entire promenade. Blackpool has been in steady decline for many years now, and large areas are struggling to live up to the expectations of 21st-century holidaymakers. However, the town is hugely popular with stag and hen parties, and its clubs and lively bars are always open. Amongst the more traditional visitor attractions in Blackpool is the famous Tower Ballroom – used in BBC’s Strictly Come Dancing TV show. This unique part of England can get very crowded during summer weekends and during the Blackpool illuminations, so renting a holiday apartment in Lytham could be a good idea if you like to escape the tourist throngs from time to time.

Holiday Accommodation in Blackpool Allows You to Live Amongst Local People

The most iconic attraction in Blackpool is its famous tower. The enormous structure was designed to resemble the Eiffel Tower in Paris, and it is an integral part of the Blackpool seafront. Blackpool is also home to three piers that host a wide range of fairground attractions and rides. The Central Pier features a huge ferris wheel that has become an integral part of the promenade. However, Blackpool’s biggest attraction is the Pleasure Beach. Featuring a large selection of themed rides and white-knuckle experiences, Pleasure Beach is the UK’s most popular theme park. And if you’re lucky you might get a chance to catch a live show, concert or the PDC World Matchplay Darts Championship at the town’s iconic Winter Gardens venue. Whatever you do with your time in Blackpool, make sure you get a taste of authentic local life by renting a holiday home in a local residential area.

It doesn’t matter whether you are searching for holiday accommodation in Gateshead or vacation homes in Paris, booking with 9flats takes the couchsurfing phenomenon to the next level. The 9flats experience provides you with a luxurious holiday home with all the modern luxuries you can imagine. However, renting a private property from 9flats will mean you aren’t forced to endure the inconvenience of sharing your refuge with a stranger. Instead of couchsurfing in Blackpool, check out what the 9flats website has to offer!

Bispham
Hoohill
Marton
Marton Moss Side
Norbreck
close
Cookies help us deliver our services. By using our services, you agree to our use of cookies.