Well done. Look what authentic hosts in Paris-Belleville, Père Lachaise are offering to you on 9flats. 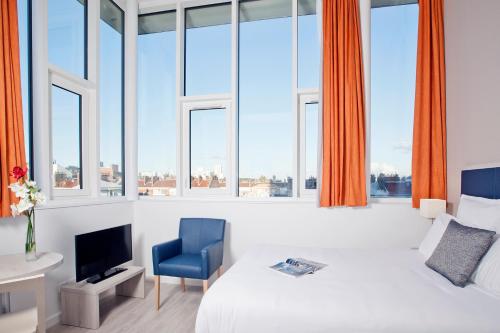 Sejours & Affaires Paris-Davout offers pet-friendly accommodation in Paris. Opéra Bastille is 3 km from the property. Free WiFi is provided throughout the property.Book now
from $63 per night 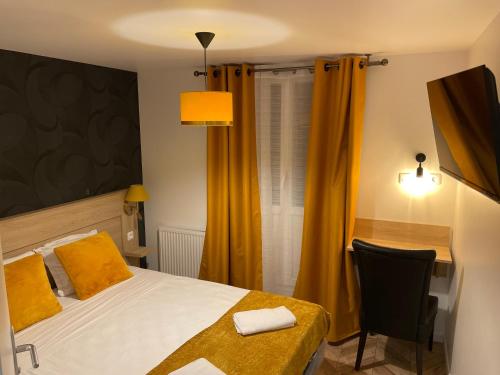 Attractively situated in the 20th arr. District of Paris, Ménil Bon Temps is situated 3 km from Gare de l'Est Metro Station, 3 km from Pompidou Centre and 3.2 km from Gare de l'Est. Among the facilities of this property are a restaurant, a 24-hour front desk and a shared lounge, along with free WiFi throughout the property. The hotel has family rooms.Book now
from $80 per night 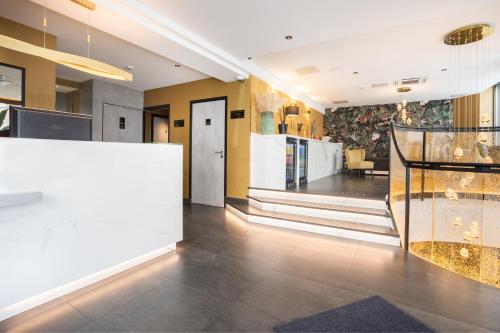 Hotel Prince Albert is located in the 12th district of Paris, 500 metres from the Gare de Lyon RER and Metro train station. It offers air-conditioned accommodation with free Wi-Fi.Book now
from $84 per night Located in Paris, Nouvel hotel is 2.1 km from Opéra Bastille and provides facilities like garden and shared lounge. Located around 3.4 km from Place de la République, the hotel is also 3.6 km away from Notre Dame Cathedral. All rooms include a patio with views of the garden.Book now
from $80 per night 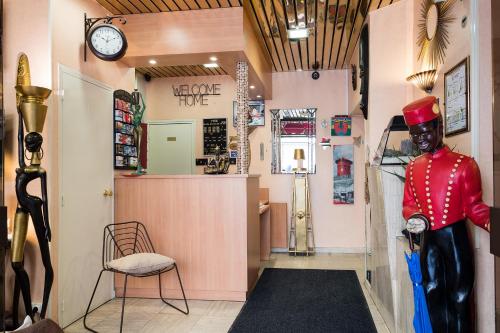 Located in the heart of Paris in the 11th district, Hôtel Paris Voltaire is just a 13-minute walk from the famous Place des Vosges. It offers an elevator, luggage storage and free Wi-Fi access in the entire hotel.Book now
from $80 per night 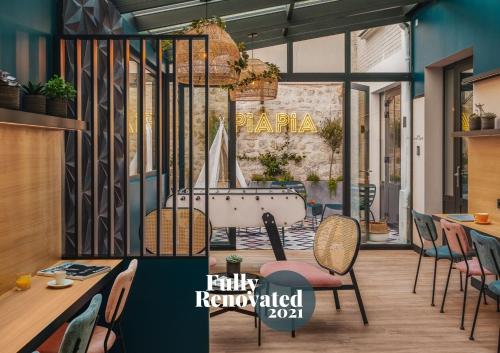 Opened in December 2021, Hôtel Piapia is located in the east of Paris just 900 metres from Place de la Nation and its many transport links. The famous Père Lachaise Cemetery is a 15-minute walk away. The hotel’s contemporary décor is inspired by space, the planets and the stars.Book now
from $89 per night 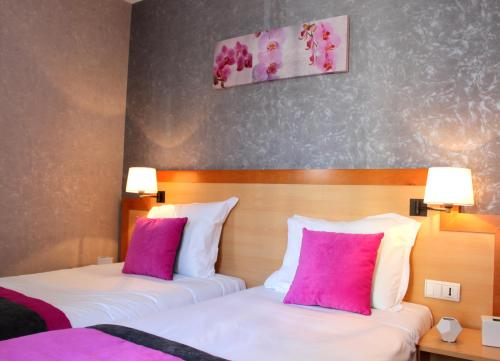 Hotel du Chemin Vert is located just 500 metres from the Père Lachaise Cemetary in Paris. It offers soundproofed accommodation with air conditioning and free Wi-Fi access.Book now
from $80 per night 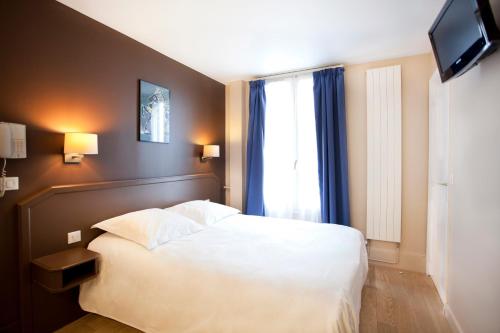 This hotel is 50 metres from Père Lachaise Cemetery and 260 metres from Gambetta Metro Station, which leads directly to Place de la République. It offers free WiFi access and rooms are accessible via a lift.Book now
from $86 per night 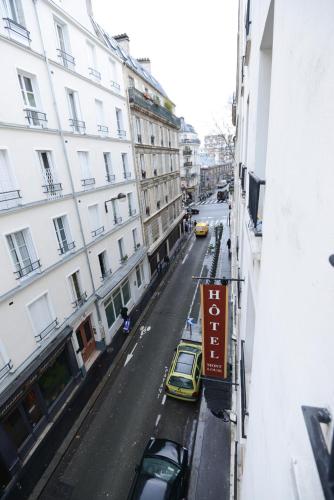 Set in Paris, within 1.4 km of Opéra Bastille and 2.9 km of Pompidou Centre, HOTEL DU MONT LOUIS provides accommodation with a shared lounge and free WiFi. The property is located 1.8 km from Paris-Gare-de-Lyon, 3.2 km from Gare de l'Est Metro Station and 3.4 km from Gare de l'Est. The accommodation offers a 24-hour front desk, a shared kitchen and luggage storage for guests.Book now
from $47 per night

Located 5 minutes on foot from Gare de Lyon SNCF Train Station, this hotel offers 24-hour reception and express check-in and check-out. Jardin des Plantes is a 15-minute stroll across a bridge over the River Seine.Book now
from $99 per night 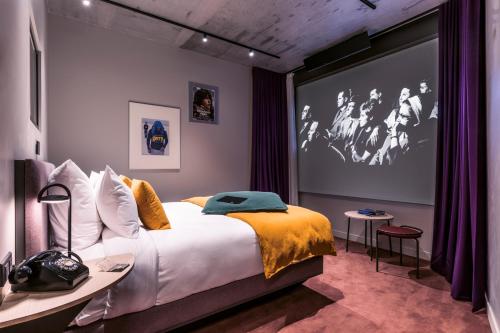 Set in Paris, 1.9 km from Opéra Bastille, Hotel Paradiso features a terrace and views of the city. With a bar, the 4-star hotel has air-conditioned rooms with free WiFi, each with a private bathroom. The accommodation offers a 24-hour front desk and room service for guests.Book now
from $80 per night 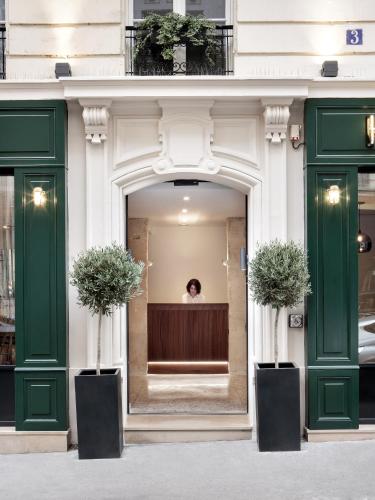 Located in the 11th arr. District of Paris, Newhotel Le Voltaire is 1.4 km from Opéra Bastille. 1.7 km from Place de la République, the property is also 2.7 km away from Pompidou Centre. The property offers a 24-hour front desk and free WiFi is available.Book now
from $80 per night

A holiday apartment in the 20th arrondissement, a stone’s throw from Père Lachaise

A vacation rental in Paris in the 20th district, by choosing for example a vacation apartment towards Père-Lachaise, will allow you to make beautiful walks in the most mythical cemetery of Paris. With its 44 hectares of shady avenues, romantic alleys, winding streets, forests, statues, the Père Lachaise cemetery, particularly pleasant in summer and autumn, is the largest green space in the capital. Walking through it is a real history book unfolding before our eyes, where each grave is a reflection of the fashion and concerns of the time. You will appreciate the variety of tombs where many illustrious people are buried: Frédéric Chopin, Honoré de Balzac, Molière and La Fontaine, Colette or even Simone Signoret and Yves Montand… For a long time, the tomb that contains the unfortunate love affairs of Heloise and Abelard under a neo-gothic mausoleum was the favourite visit of walkers, until the tomb of the legendary Jim Morrisson, singer of the Doors, became in its turn an unmissable place of worship, covered with fan graffiti.

Holiday rentals in the 20th arrondissement, in the heart of popular and cosmopolitan Paris

Thanks to a holiday rental in Paris in the 20th arrondissement, you will fall under the spell of Belleville and its former hamlet Ménilmontant, which still retain the memory of their dual past, rural and working class. The guest rooms in Belleville will allow you to enjoy the alleys of this old village which descend the slopes with an authentic charm. There are numerous antique shops and bistros. Behind the carriage gates are discreetly hidden garden-cities sometimes housing artists’ studios which open their doors to the public once a year. The population of Belleville today is one of the most diverse and cosmopolitan in Paris, and the district, very popular with students for its attractive prices, is lively day and night. At 72, rue de Belleville, a plaque claims that it was “on these steps and in the greatest destitution that Edith Piaf was born”, enough to keep the legend alive. A museum is dedicated to her a little further on, in the 11th arrondissement. If you feel like something unusual, don’t miss, during your holiday rental in Paris in the 20th arrondissement, a visit to the Jardin Naturel, located at the very end of Rue de la Réunion, wild and refreshing. Nearly 200 plant species grow there freely, without pesticides. A pond covered with water lilies is home to a host of insects, dragonflies and frogs. It is also a paradise for birds, robins and others. A secret place but nevertheless a must since Jean-Jacques Rousseau already liked to wander in its heights. Next to the 20th arrondissement you can enjoy a holiday rental in Paris 11 where the Bastille district is very lively. The bed and breakfast in Paris 12 will bring you to the Parc de Bercy side, while a holiday apartment in Paris 19 will be ideally located near the Buttes Chaumont.