Well done. Look what authentic hosts in Ile-de-France are offering to you on 9flats. 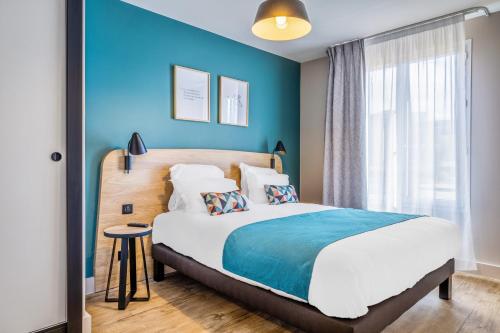 Appart’City Confort St Quentin en Yvelines is located in Bois d'Arcy, 10 km from Versailles, and close to the business districts of Saint-Quentin-en-Yvelines, Elancourt, Plaisir and Guyancourt. This Green Key-awarded property offers villas and apartments, all of which were renovated in January 2020.Book now
from $74 per night 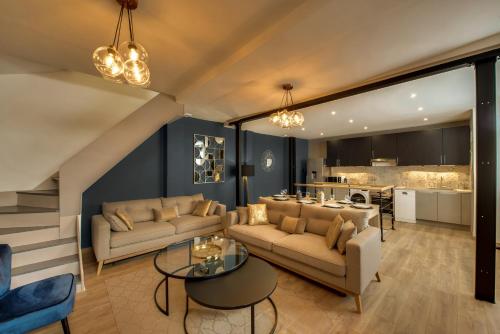 Beautiful Triplex in the center of Paris

In the 10th arr. District of Paris, close to Gare de l'Est Metro Station, Beautiful Triplex in the center of Paris has a shared lounge, free WiFi and a washing machine. This apartment is 1.2 km from Gare du Nord and 2.2 km from Louvre Museum.Book now
from $761 per night 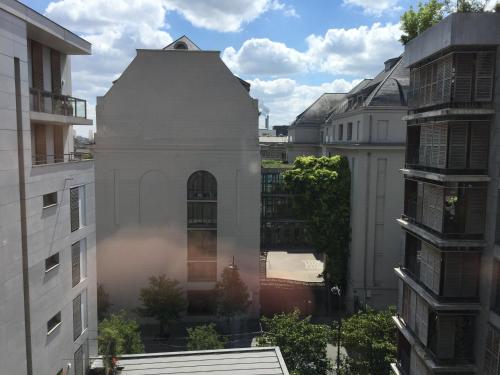 Located in Paris in the Ile de France region, Appartement Lumineux Paris 13 has a balcony. Free WiFi is provided throughout the property and private parking is available on site.Book now
from $294 per night 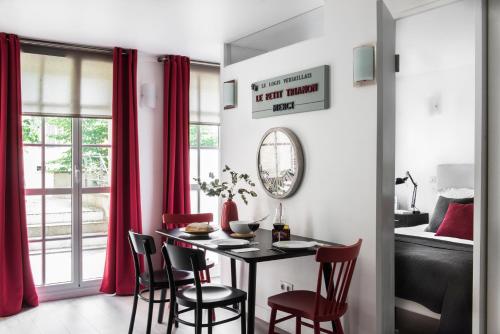 Located in Versailles, Le Logis Versaillais is a 10-minute walk from the Chateau de Versailles and the Notre-Dame Market. Versailles Train Station, which offers suburban and city trains, is a 5-minute walk away. Free WiFi is available throughout.Book now
from $122 per night 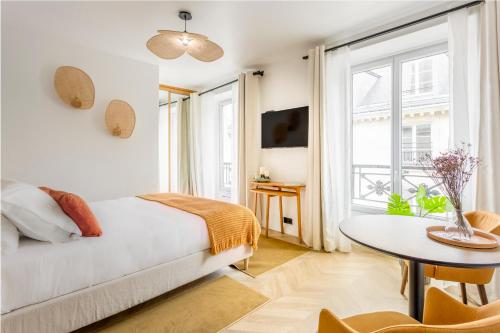 Best Stay Jeuneurs is situated in the centre of Paris, close to Louvre Museum, Opéra Garnier and Pigalle Metro Station. Complimentary WiFi is available and private parking is available on site.Book now
from $87 per night 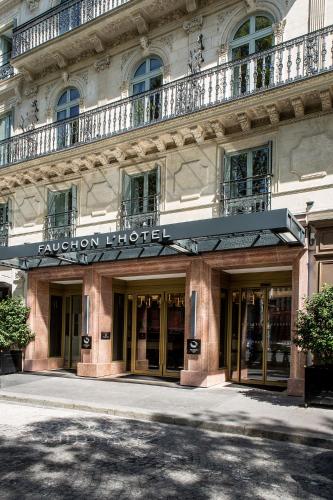 Situated in Paris, a 8-minute walk from the Place de la Concorde and a 2-minute walk from Madeleine Metro Station, Fauchon l'Hotel offers accommodation with a fitness centre and a Spa Carita. This property is set a short distance from attractions such as Olympia concert hall, refine shops and Opéra Garnier. Free WiFi is included.Book now
from $87 per night 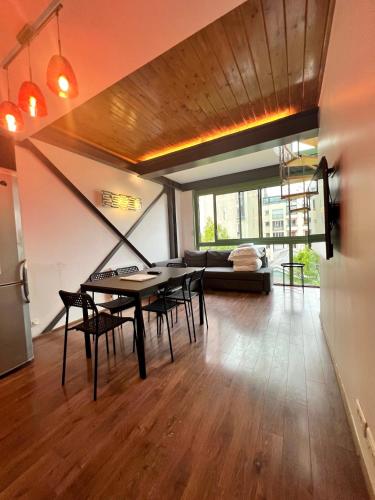 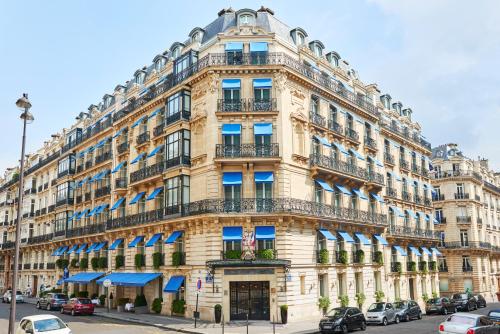 Offering a spa, a wellness centre and a restaurant, La Tremoille Paris is located in Paris, 500 metres from Champs-Elysées. This elegant hotel is set in a traditional-style building. Guests are invited to enjoy the terrace.Book now
from $87 per night 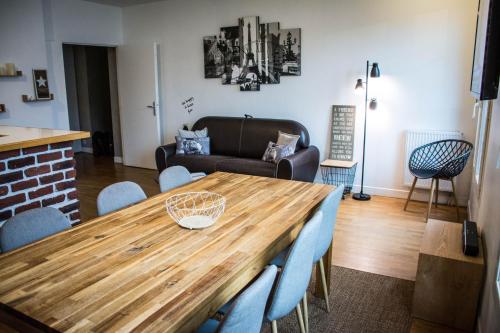 Situated in Serris in the Ile de France region, Cosy Apartment Carré Elysée Serris is a 3-star property boasting free WiFi. The 3-star apartment is 36 km from Paris-Gare-de-Lyon.Book now
from $87 per night 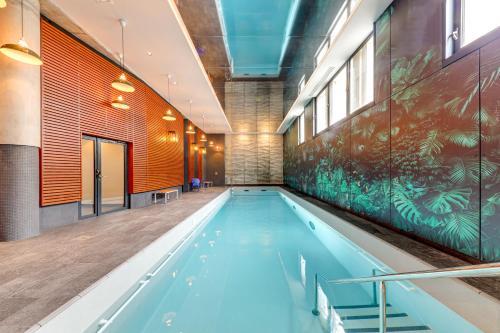 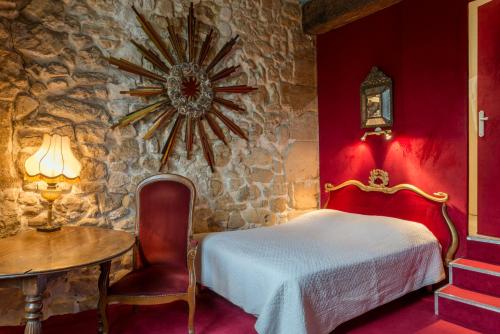 Located in the centre of Paris, in a building dating back to 1640, Hotel Esmeralda is just 100 metres from Notre Dame Cathedral. There is a 24-hour reception and free WiFi access in all rooms.Book now
from $87 per night 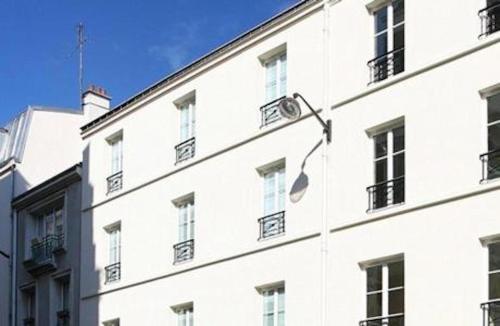 Located just 10 minutes from La Butte Montmartre, Hôtel Tingis is set in a typically Parisian cobbled street with cafes and terraces. It offers modern accommodation and free Wi-Fi access.Book now
from $107 per night

See all 14550 accommodations in Ile-de-France

Apartments in the Île de France – in the heart of France

The Île de France is one of the most visited regions in France, as it corresponds for the most part to the metropolitan region of Paris. However, the “Island of France” owes its name to a geographical region formed by the rivers Seine, Beuvronne, Marne and Oise. Your holiday home in the Île de France is located on this island in the heart of France and is an ideal starting point to get to know the French capital with its world-famous sights. But also in the Paris suburbs you will find apartments in the Île de France in a tranquil location, from which the Eiffel Tower, Arc de Triomphe, Champs-Élysées and Louvre are only a short drive away. For example, book now a private accommodation in Plaisir west of Paris and enjoy the real French way of life in this tranquil suburb among the inhabitants. At the same time, you don’t have to sacrifice comfort and privacy. From Plaisir, Versailles with its world-famous castle is only a few kilometres away. But Plaisir itself also has a worthwhile excursion destination to offer with its listed castle.

Directly to Paris: from your accommodation in Île de France

With an apartment in the Île de France, for example, you will be living in the heart of Paris, and countless sights are just waiting to be discovered. South of the Seine, you can marvel at Paris’s noble districts with their elegant restaurants, cafes and boutiques, stroll along the promenade and enjoy the spectacular views from the viewing platforms of the Eiffel Tower. If you book a private holiday home on Île de France north of the Seine, you’re close to the Champs-Élysées boulevard with the Arc de Triomphe built by Napoleon in the French capital in 1806. Use your accommodation to visit the legendary Moulin Rouge, the Notre Dame cathedral, the symbol of Paris, and Napoleon’s corpse in the Cathedral of the Invalids. The Louvre is one of the most important museums in the world, with more than 380,000 exhibits, while the Picasso Museum houses paintings and sculptures by the artist from all his creative periods. If you decide on a holiday apartment in Asnières-sur-Seine, you can also visit the Montmarte cemetery from here within easy reach. Among others Alexandre Dumas, Heinrich Heine and François Truffaut are buried here.

Apartments in the Île de France: e.g. in the Paris suburbs

Paris is a spacious city where the sights are often far apart, even within the city centre. If you want to travel quickly and easily from your holiday home in the Île de France, you should use the Paris metro network and the RER rapid transit lines. The RER express lines have been set up to relieve the metro system. They are particularly useful if you have booked accommodation in Île de France outside Paris and want to get directly from the suburbs to downtown Paris. If you want to travel from Paris to another holiday home in France, you have six stations at your disposal, which offer connections to different parts of the country depending on the location, for example the northern station to northern France and further to the Benelux countries. In the north of the country we also have accommodation, e.g. Holiday apartments in Lower Normandy.

Latest reviews for places in Ile-de-France

Essonne
Hauts-de-Seine
Paris
Seine-St.-Denis
Seine-et-Marne
Val-d'Oise
Val-de-Marne
Yvelines
close
Cookies help us deliver our services. By using our services, you agree to our use of cookies.