Well done. Look what authentic hosts in Tucson are offering to you on 9flats. 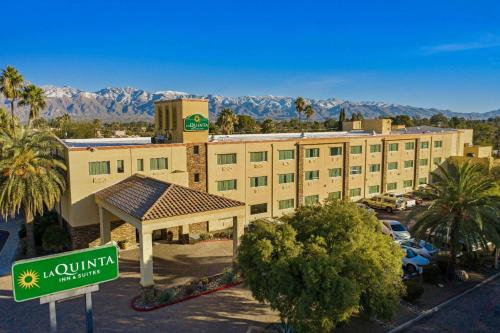 Offering an outdoor pool and a hot tub, this hotel is 20 minutes’ drive from Tucson International Airport. All rooms are equipped with free Wi-Fi. A free continental breakfast is served daily.Book now
from $77 per night 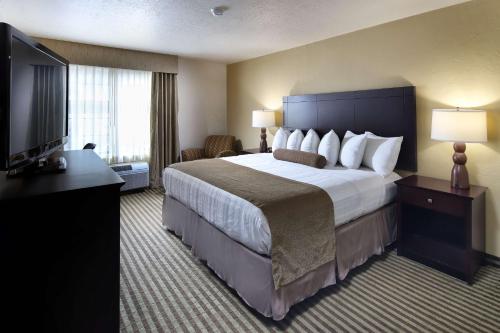 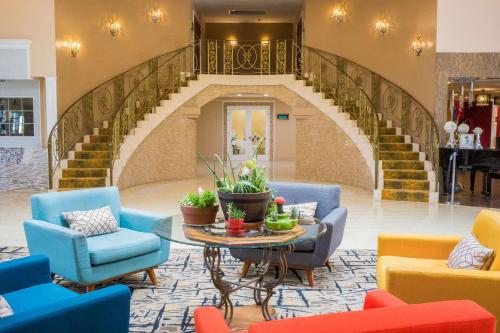 This hotel is located in historic downtown Tucson, Arizona, right off Interstate 10. It has an Olympic size outdoor swimming pool, free Wi-Fi in rooms, and an on-site café.Book now
from $75 per night 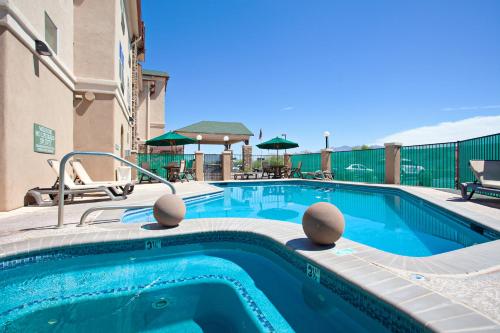 Located off I-10 and 2 miles from the University of Arizona, this hotel features a lit outdoor pool. Free WiFi service is available throughout the premises.Book now
from $78 per night 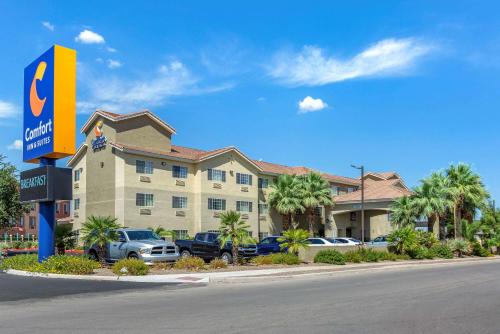 Only 19 km north of central Tucson, Arizona, this hotel offers excellent views of the Catalina Foothills as well as convenient amenities and helpful services.Book now
from $84 per night 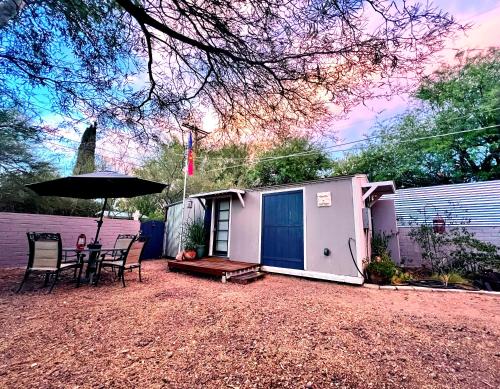 Peaceful Tucson Tiny House Getaway with Backyard, a property with a garden and a terrace, is located in Tucson, 8.9 km from Tucson Convention Center, 4.7 km from Reid Park Zoo, as well as 8.5 km from Tucson Museum of Art. The air-conditioned accommodation is 4.9 km from Arizona Stadium, and guests benefit from private parking available on site and free WiFi.Book now
from $83 per night 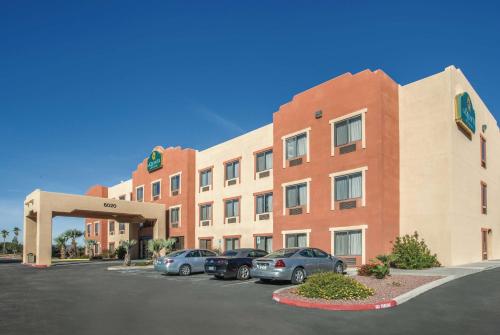 Located less than a mile from I-10, this northwest Tucson hotel features a heated outdoor pool and hot tub. Free Wi-Fi is included. A continental breakfast with fresh waffles is provided daily.Book now
from $89 per night 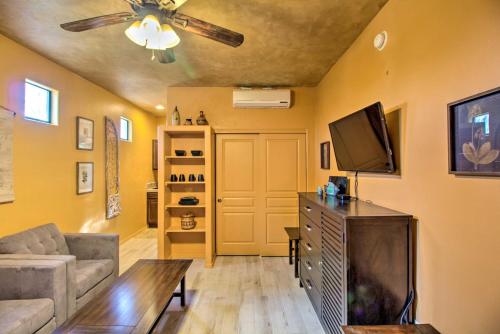 Located in Tucson in the Arizona region, Studio with Patio - 12 Mi to Saguaro National Park! features a patio. The property is 37 km from Tucson Museum of Art and 43 km from Reid Park Zoo.Book now
from $79 per night Set in Tucson, 12 km from Arizona Stadium, Home2 Suites By Hilton Tucson Airport, Az offers accommodation with an outdoor swimming pool, free private parking, a fitness centre and a bar. The property is around 14 km from Tucson Convention Center, 7.1 km from Pima Air & Space Museum and 8.2 km from Pima Air Museum. The property provides a barbecue, a 24-hour front desk, and free WiFi is available throughout the property.Book now
from $83 per night 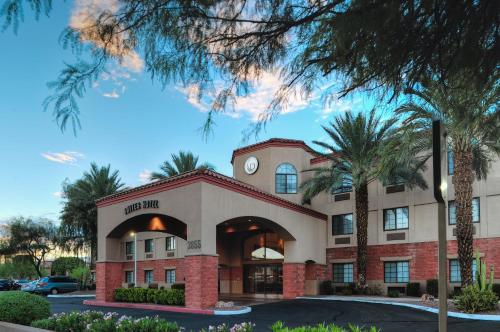 This Tucson property is 2 miles from the University of Arizona. The property offers an outdoor pool, hot tub and suites with a fully equipped kitchenette.Book now
from $60 per night Situated within 12 km of Reid Park Zoo and 24 km of Pima Air & Space Museum, The Eddy Hotel Tucson, Tapestry Collection By Hilton features rooms in Tucson. The property is located 7.5 km from Arizona Stadium, 11 km from Tucson Convention Center and 10 km from Tucson Museum of Art. The accommodation provides a 24-hour front desk and an ATM for guests.Book now
from $83 per night

See all 1380 accommodations in Tucson

Your apartment in Tucson takes you to the second largest city in Arizona, in the southwest of the United States. It is dominated by vast deserts, steppes full of cacti and barren rocks. Tucson itself is the harsh antipole to the vast, untouched prairie. Students, skyscrapers and technology companies characterize the streets. Book your private holiday home with us in Tucson and experience a fascinating tension between Wild West romance and high-tech!

Your apartment in Tucson between desert and skyscrapers

The defining landscape around your apartment in Tucson is the Sedona Desert, which spreads out on a plateau surrounded by numerous mountain ranges in the southwest of the USA. The current urban area was inhabited more than 12,000 years ago by Paleo-Indians who took water from the Santa Cruz River to farm. Today, the river is largely dried up and carries water only during the short summer monsoon. It was not until the University of Arizona was founded in 1885 that the economic rise of the once sleepy desert city began. Today, Tucson is one of the leading technology centers in the USA. Well-known companies such as IBM, Bombardier and Texas Instruments maintain important branches here and work closely with the technical universities. One of the most famous sights is the Old Pueblo Trolley, a historic tram that makes its way through modern city canyons almost like a foreign body every weekend, taking students from the university to the 4th Avenue entertainment mile. Outside the city, you will find Biosphere 2. The declared goal is to create a completely self-sufficient living environment, completely independent of the outside world. NASA hopes to gain insights into how humans could survive permanently on the moon. But real Western fans know only one destination in the desert: the famous Old Tucson Studios. Numerous famous Wild West films and series have been shot here since 1939, including “Our Little Farm”.

Through the desert from your private holiday home in Tucson

Thanks to air-conditioned rental cars and well-developed highways, you can explore the desert very comfortably. So your way could lead you to a private holiday accommodation in Sedona. The city is located at the end of Oak Creek Canyon and is best known for its distinctive New Age movement. Followers of the movement firmly believe in the spiritual power of the surrounding mountains. The city itself is marked by surrealist art, which experienced very strong impulses here with Dorothea Tanning and Max Ernst. Like Tucson himself, Scottsdale is also influenced by artificial Wild West romanticism. From your Apartment in Scottsdale you can easily reach the most famous attraction of the small town – the Rawhide amusement park. Several times a day, elaborately staged stunt shows take place, from the shooting in the saloon to horse theft, there is something for every taste. East of the capital Phoenix you will find numerous private Holiday Apartments in Mesa, the third largest city in Arizona. Although Mesa has only about 440,000 inhabitants, it is the largest city in the USA with about 330 km². This is also due to the fact that there are hardly any skyscrapers in Mesa. Here, extensive settlements with countless single-family houses dominate. The inhabitants attach great importance to privacy, whereby Couchsurfing is hardly spread in Mesa. The Mesa Historical Museum gives an insight into the past and exhibits numerous finds of the Hohokam culture. It created the most complex irrigation system in the New World and was able to make a living from agriculture despite the barren desert landscapes. If you drive south along the coast, you will find numerous private apartments in Baja California Sur, Mexico. The southern tip of the peninsula is world famous for its endless sandy beaches and mild climate. The hub of the nightlife is the Cabo Wabo Cantina, a popular nightclub run by guitarist Sammy Hagar.