Well done. Look what authentic hosts in New York City-Midwood are offering to you on 9flats. 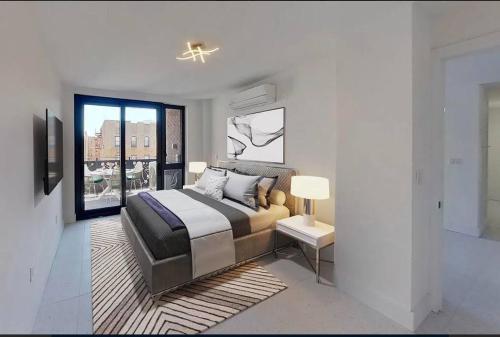 Boasting air-conditioned accommodation with a balcony, Stylish Luxe Apartment with balcony near JFK is set in Brooklyn. This apartment is 3.2 km from Brooklyn Academy of Music and 4.4 km from Coney Island Cyclone Roller Coaster.Book now
from $11 per night

With an apartment in Midwood, New York, you live in one of the oldest neighborhoods in the Big Apple. It is also home to Brooklyn University, one of the best academic institutions in the city. It is all the more surprising that daily life is relatively inexpensive. So you have with us the best possibility to explore one of the most fascinating cities in the world.

Apartments in Midwood, New York – next door to Woody Allen

Midwood is a typical residential area in Brooklyn and was already founded in 1652 by Dutch settlers. This makes Midwood one of the oldest and historically most significant sections of New York. Over the years, the composition of the population changed continuously. Today, the majority of the inhabitants have Russian roots. In addition, many apartments in Midwood, New York, are occupied by immigrants from the Caribbean. The academic center is Brooklyn College, part of the large network of the City University of New York. Founded in 1930, Brooklyn College is one of the oldest and most renowned universities in the city. You should take part in a “Trip to the Famous” tour, which leads past the homes of numerous stars. You will learn that big names like Woody Allen, Marisa Tomei or Barry Manilow live in private apartments in Midwood, New York. Not surprisingly, the district has often been used for famous film shoots. To this day, numerous fans of the Cosby Show, von Hair or Seinfeld make the pilgrimage to Midwood to find the original locations of their favorite shows. The green heart of the district is Amesort Park, which is a popular spot for those seeking relaxation, especially on hot days, when they can picnic or play with their children in the shade of the old trees. A true oasis of peace in the midst of the bustling life of Brooklyn.

In search of the right provisions for on the road? Then Brennan & Carr on Nostrand Avenue is the place to be. Here you’ll find an impressive selection of sandwiches, with plenty of content and at more than fair prices. You shouldn’t expect any visual highlights, but the generously sized sandwiches are very tasteful. The Sushi Bistro on 19th Street proves that you can generally eat relatively cheaply in Midwood. Here, numerous variations of sushi, maki and sashimi are freshly prepared right before your eyes. The whole thing is served with a friendly smile from the always good-humoured service, the best conditions to feel good. By the way, if you visit the Sushi Bistro with some friends, you should definitely order the House Party Tray – a generous selection of different delicacies. Afterwards we recommend a visit to the Taous Restobar Lounge on Coney Island Avenue. Here you will find casual entertainment in the immediate vicinity of your private vacation home in Midwood, New York. The highlight of the week is always Friday, when the 90s party gets going and tipsy New Yorkers try to cut a good figure at karaoke. Table dancers, who heat up the atmosphere from ten o’clock in the evening, provide the erotic tingle. On the way home after a long night, you’ll be glad you didn’t go couchsurfing in Midwood, New York. Because this way you can let the impressions of a varied day take effect on you in peace. A private accommodation in Harlem, New York leads you into a similarly inexpensive but much more colourful world, where the black heart of the United States beats, marked by jazz and young artists waiting for their big breakthrough. You can book the best private vacation accommodations in New York directly with us.