Well done. Look what authentic hosts in New York City-Loisaida are offering to you on 9flats. 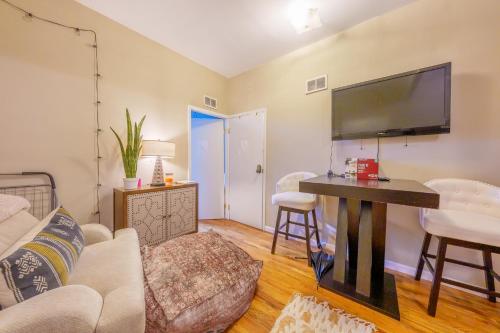 The Metropolitan - East Village Manhattan is located in the East Village district of New York, 2.5 km from NYU - New York University, 2.5 km from Bloomingdales and 3.5 km from United Nations Headquarters. The property is 3.8 km from Chrysler Building and 4 km from Grand Central Station.Book now
from $83 per night

The neighbourhood of Loisaida is located in the Lower East Side area of Manhattan in New York City. The area has historically been a popular place with the Latino community. Indeed, the name Loisaida is derived from the Latino pronunciation of “Lower East Side”. The neighbourhood more or less covers the same area of Manhattan as Avenue C in so-called Alphabet City, and its multicultural feel gives the entire district a rich and interesting atmosphere. A holiday apartment from 9flats will put you right at the heart of this vibrant community in a way hotels simply can’t compete with.

During the 19th century, this particular area of New York was one of the most deprived in the city. Popular with Jewish, Irish, Italian and German immigrants, Loisaida was comprised of run-down tenements without running water or an adequate sewage system. However, the transformation of the area could not have been more comprehensive, particularly after the World War 2. More recently, a number of government-funded housing projects improved life in the district immeasurably. However, it has only been during the last 15 years that the neighbourhood has changed from one of relatively high crime and unemployment rates to one favoured by the city’s artists and students. There is a burgeoning community spirit in the district, and the best way to get a feel for it is by staying in a holiday apartment in New York – booked via the 9flats website. Your own holiday residence will also provide you with the seclusion and creature comforts you’re used to at home.

Loisaida and the Lower East Side is adjacent to New York’s Chinatown, so the incredible restaurants and vibrant night-life of the area is within walking distance. However, the area truly comes to life once a year when the Loisaida Festival is in town. Since its inception in 1987, this fabulous celebration of local art and ethnic pride attracts over 15,000 visitors to the local streets. While the music and culture of Puerto Rico take centre stage, several cultures from New York are represented, making this a truly unique festival. Organisers also use the festival as a platform for communicating with local residents about health and social issues. Although located in the world’s richest city, there is no doubting the sense of community that exists in Loisaida, and you can become part of that very special community by renting holiday accommodation in Alphabet City in one of the local neighbourhoods.

The couchsurfing phenomenon has been giving travellers the chance to find cheap accommodation for many years now. However, it has not been giving people the chance to live in secluded luxury. The service offered by 9flats has many similarities with couchsurfing, but it also offers travellers the opportunity to rent entire holiday homes – equipped with all the trappings of modern life you can imagine.