Well done. Look what authentic hosts in Siena are offering to you on 9flats. 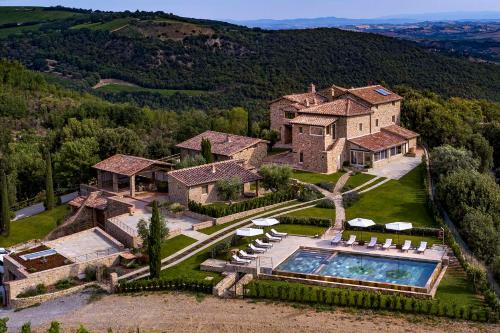 Relais Mastrojanni is situated in Castelnuovo dell’Abate, 39 km from Siena and 38 km from Saturnia. Free WiFi is featured throughout the property and free parking is available on site.Book now
from $207 per night 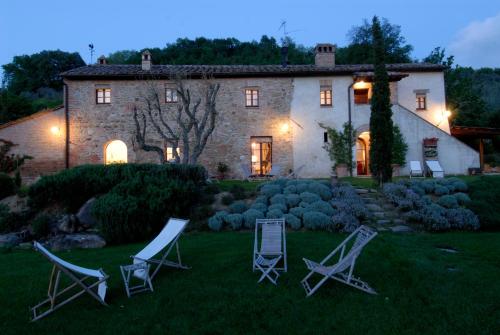 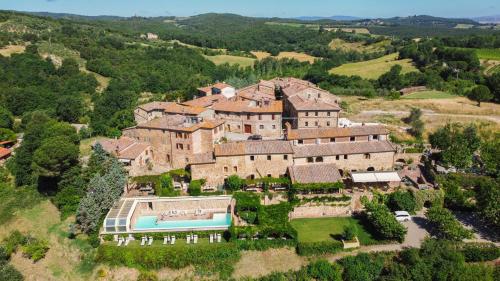 Bosco Della Spina has an outdoor infinity pool and garden, with panoramic views of the Sienese hills. It offers free Wi-Fi and free parking, just 30 minutes’ drive from Siena.Book now
from $79 per night 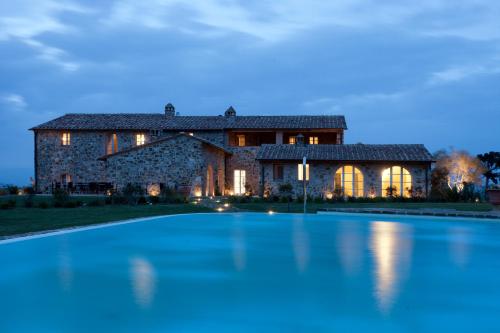 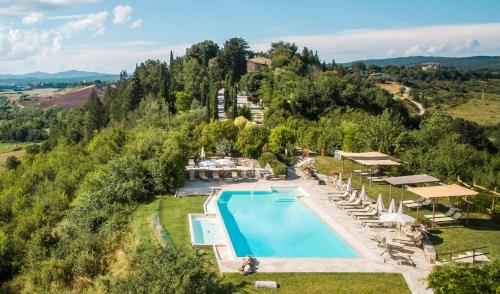 Laticastelli is a resort perched on the top of a Tuscan hill with an impressive view of the surrounding countryside, on the road to a park with cedars and flowers.Book now
from $79 per night 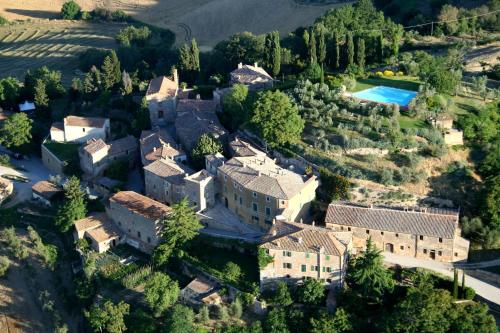 Featuring a free outdoor pool and garden with BBQ facilities, Borgo Lucignanello Bandini is 5 km from the centre of San Giovanni d’Asso. It offers self-catering accommodation and free Wi-Fi throughout.Book now
from $146 per night

Set in the Tuscan countryside, La Villa di Arezzo is 15 minutes’ drive from Arezzo. It offers classic-style accommodation, an outdoor pool and free bikes. A continental breakfast is provided daily.Book now
from $97 per night 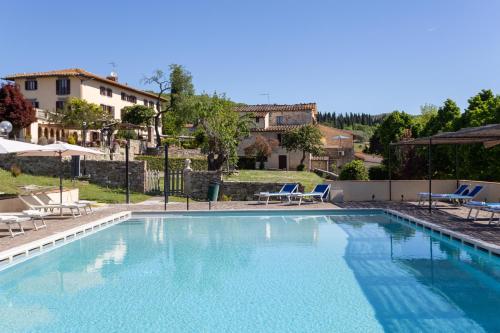 Casafrassi is an 18th-century villa with free WiFi located in a panoramic setting less than 5 minutes’ drive from Castellina in Chianti. This large estate boasts an outdoor pool.Book now
from $79 per night 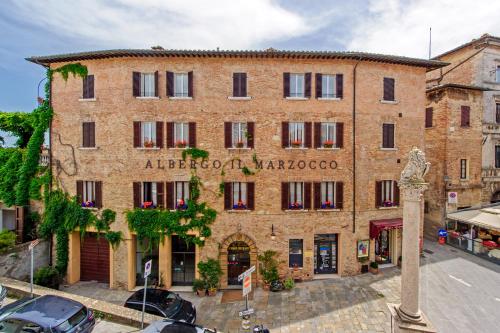 Located within the medieval walls of Montepulciano, the 16th-century Albergo Il Marzocco is the oldest hotel in town. It has a bar, free Wi-Fi, and classic rooms with views of Lake Trasimeno or the town.Book now
from $79 per night 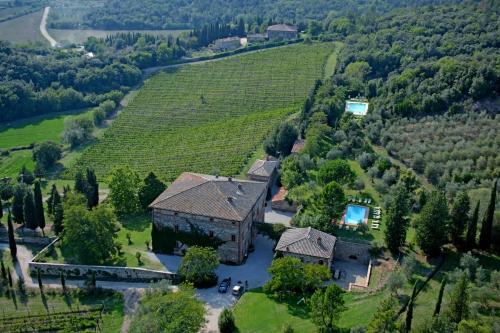 This aristocratic villa from the 1700s features 2 swimming pools, a lush garden and characteristic stone walls. At 2 km from Rapolano Terme, it offers rooms and apartments with antique Tuscan furniture and wood-beamed ceilings.Book now
from $79 per night 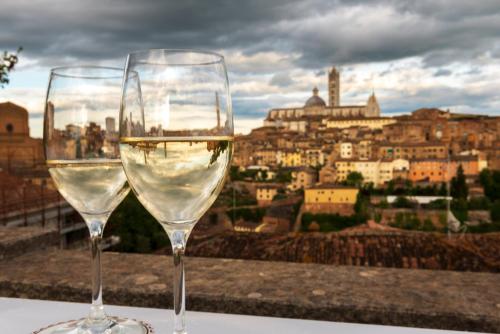 Villa Elda enjoys a panoramic hilltop position just outside the centre of Siena. You can walk to Piazza del Campo in 10 minutes. There is free Wi-Fi.Book now
from $79 per night 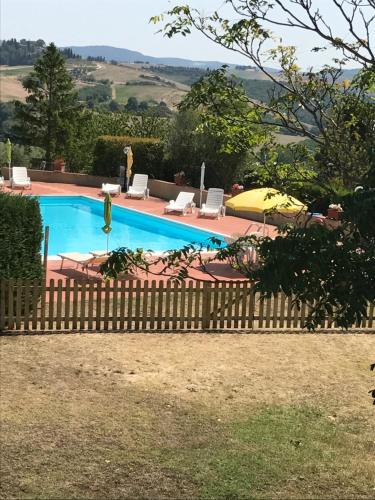 Featuring an outdoor pool and a sun terrace, La Canonica offers rustic Tuscan-style accommodation with a garden. Located in the Tuscan countryside, the property produces wine, olive oil and truffles.Book now
from $79 per night

See all 4086 accommodations in Siena

If you fancy one of the most beautiful cities in Tuscany, then book with us an apartment in Siena. You can expect a medieval city with Gothic architecture and significantly more comfort than the Couchsurfing in Siena. Siena is located about 50 kilometers from Florence and about 190 kilometers northwest of Rome. One of the main attractions is the cathedral, which is decorated in white and black marble. However, the cathedral was never completed – even due to static defects. The last official works were finished in 1339. Only the north side nave and the façade of the Duomo Nuovo are in use today. In addition to this nave Siena has four other basilicas, of which only the Basilica dell’Osservanza outside the city walls. Friends of medieval architecture and art should not miss the Museo dell’Opera del Duomo. Here you will find, for example, the Madonna of Ducchio, which was created between 1308 and 1311. Also worth seeing is the Ospedale Santa Maria della Scala an old pilgrim hospice that was built more than 1,000 years ago.

Apartments in Siena: art and cuisine

In Piazza del Campo you will find the town hall, the Palazzo Communale. The square is made of red brick and segmented with bright strips of Tavertin. Every year, the famous horse race Palio de Siena takes place here. The races will start on the 2nd of July and the 16th of August and will be decided between the different districts respectively regions, the Conraden. In addition to these races, there are other attractions in Siena such as the Academia Musicale Chigiana with its art exhibitions and concerts, the Pinacoteca Nazionale di Siena with famous works from the 13th to 16th centuries and the Banca Monte dei Paschi di Siena. which is considered the oldest surviving bank in the world. In addition to all these architectural and artistic treasures you can expect a beautiful nature. Tuscany is home to many grapevines and olive trees. A special feature of Tuscan cuisine is that the bread is saltless. The reason for this can be found in the 12th century, because at that time Pisa delivered no more salt to Tuscany. Surely you will discover such historical events when staying in Pisa.

Siena is pure Tuscany and in pure culture. In addition to the many historical sights and the exciting landscape, especially the Tuscan cuisine lures in this region between the rivers Tressa, Bozzone, Arbia and Sorra. Book an apartment in Siena with us and enjoy Tuscan life around the clock. You want to see more of Tuscany? Then secure your Apartment in Lucca, a holiday apartment in Livorno or a private accommodation in Florence. Florence is considered the cradle of the Renaissance and was the center of European trade and finance in the Middle Ages. Of historical importance is also Avignon in France. Convince yourself and book an apartment in Avignon.