Well done. Look what authentic hosts in Rovigno D'istria are offering to you on 9flats. 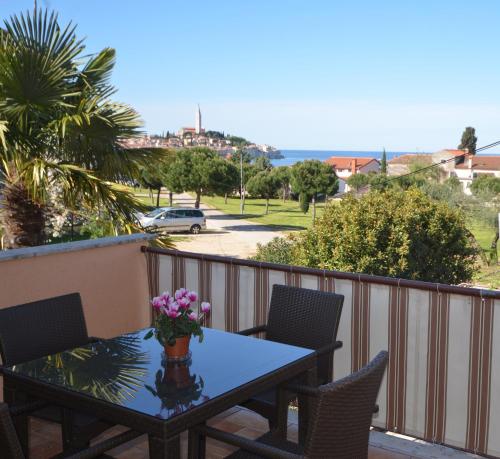 Just 250 metres from the beach, Apartments Palma enjoys quiet location 1 km from the Rovinj’s vibrant historic centre. Surrounded by the lush garden with barbecue facilities and sunbathing chairs, it offers self-catering accommodation with free Wi-Fi and a balcony or a terrace.Book now
from $83 per night 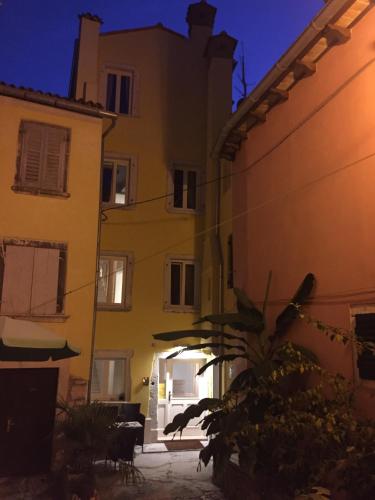 Situated in the centre of Rovinj, 200 metres from Baluota Beach and 500 metres from Sveti Andrija Beach, Casa Colloredo Free Parking features accommodation with free WiFi, air conditioning and access to a garden with a terrace.Book now
from $83 per night 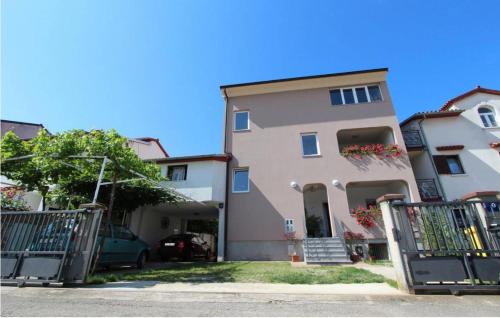 Set in Rovinj, within 1.1 km of Mulini Beach and 1.4 km of Lone Beach, Lovely Family House Robi offers accommodation with a garden and free WiFi throughout the property as well as free private parking for guests who drive. Featuring a barbecue, this property is located a short distance from Sveti Andrija Beach, Rovinj Marina and Punta Corrente Park. The accommodation provides a 24-hour front desk, a tour desk and currency exchange for guests.Book now
from $83 per night 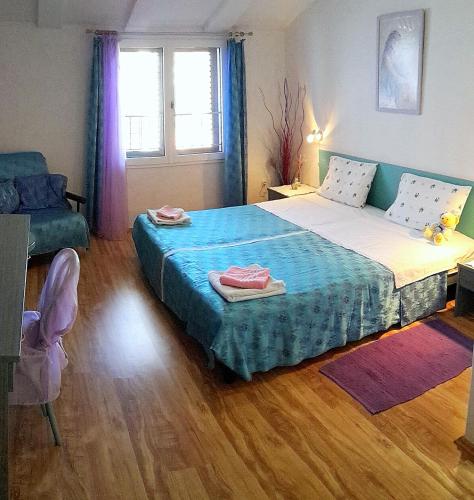 Situated in Rovinj in the Istria region and Mulini Beach reachable within 1.5 km, Apartments Dandolo features accommodation with free WiFi, BBQ facilities, a garden and free private parking.Book now
from $83 per night 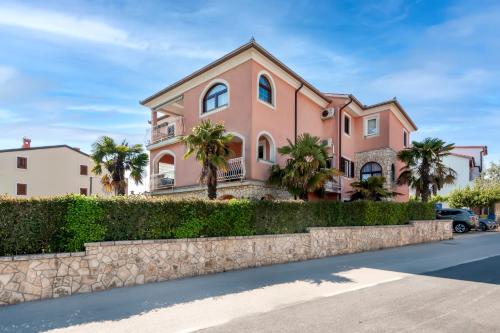 Set in Rovinj in the Istria region and Mulini Beach reachable within less than 1 km, Apartments Villa Istria Rovinj offers accommodation with free WiFi, BBQ facilities, a garden and free private parking.Book now
from $83 per night 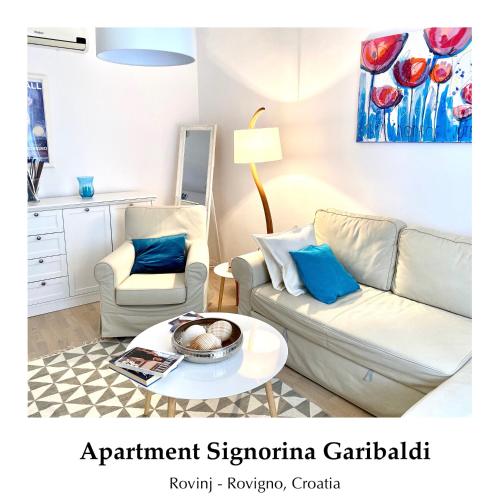 Right in the centre of Rovinj, set within a short distance of Baluota Beach and Sveti Andrija Beach, Apartment Signorina Garibaldi offers free WiFi, air conditioning and household amenities such as a fridge and kettle. The property features city views and is 1.2 km from Mulini Beach and 2.8 km from Cathedral St. Eufemia Rovinj.Book now
from $83 per night 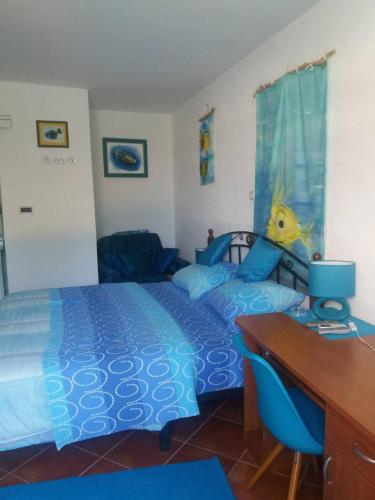 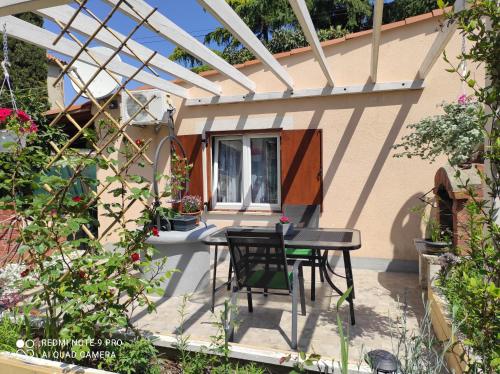 Apartments Anica is located only 300 meters from the centre of colourful Rovinj. Surrounded by a green garden, it offers air-conditioned accommodation and free Wi-Fi. Free parking on site is also available, while the nearest beach is 1 km away.Book now
from $83 per night 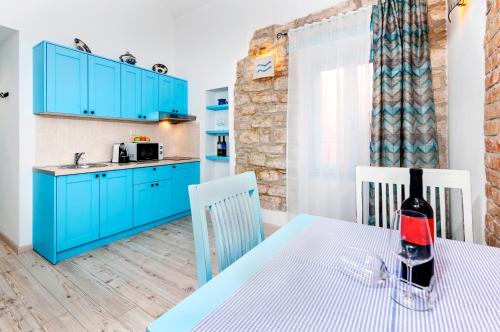 Featuring free WiFi and air conditioning, Apartments & Rooms La casa Barbaro is located in the historic centre of Rovinj, just a few steps from the lively seaside promenade and 150 metres from the Main Square. A rocky beach with several beach bars is just 200 metres away.Book now
from $519 per night 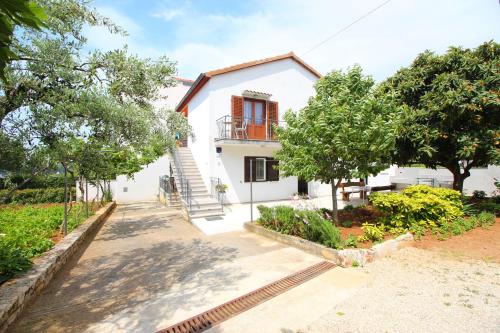 Located in Rovinj in the Istria region, with Porton Biondi Beach and Baluota Beach nearby, Casa Lidija provides accommodation with free private parking.Book now
from $83 per night

Located in Rovinj, less than 1 km from Mulini Beach, a 16-minute walk from Lone Beach and 1.4 km from Sveti Andrija Beach, Studio Legend provides accommodation with a balcony and free WiFi. The property, housed in a building dating from 2002, is 2.8 km from Cathedral St. Eufemia Rovinj and 1.6 km from Rovinj Marina.Book now
from $83 per night 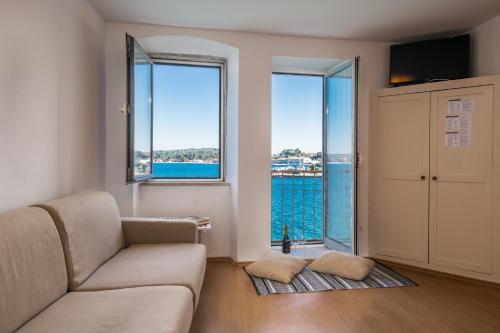 Set in the historic core of Rovinj, right on the seaside, Apartment Stella Marina Sea view offers self-catering accommodation fitted with air conditioning and a cable TV.Book now
from $83 per night

The small town of Rovinj is located on the west coast of Istria and is a true summer paradise with its unspoiled Adriatic beaches, the offshore islands and its historic old town. Compared to the big Croatian cities such as Dubrovnik or Split, everything here is a bit more relaxed, and instead of large ferry ports Rovinj offers a beach promenade lined with restaurants and cafés. No matter if you explore the Old Town with its shopping streets, craft shops and pubs from your apartment in Rovinj or enjoy the sun on a beach visit, you will not have to go long distances in the 15,000-inhabitant city. If you want to get to know country and people away from mass tourism and at the same time expect more comfort than Couchsurfing in Rovinj, a private apartment in Rovinj is the ideal accommodation to explore the old port city in your own way. Find out more about Accommodation in Poreč north of Rovinj. Poreč, like Rovinj, can look back on a long history, with parts of the old Roman pavement still preserved today, as well as impressive medieval architecture. The Euphrasian Basilica of Poreč is even part of the UNESCO World Heritage.

The city history of Rovinj dates back to the 5th century, and accordingly, the city is rich in historical buildings from all eras. The hilltop town of Rovinj is criss-crossed by winding streets dominated by the town’s landmark, the Sveta Eufemija church. In the evenings, there is an exuberant atmosphere in the many old-town pubs while street performers prove their skills. The biggest attraction of Rovinj, however, are its forest-lined natural beaches and the island landscapes off the coast. From the marina, you can not only explore the Adriatic coast by boat, but also cycle paths lead through the surrounding pine forests to the many bays along the coast. If you want to use your apartment in Rovinj for a diving holiday, do not miss a trip to the fascinating underwater caves of the island of Banjole, which can also be visited at night. In Rovinj, several diving schools offer guided excursions to Banjole as well as to the wrecks found around Rovinj. Particularly impressive is the wreck of the luxury liner Baron Gautsch, who ran in 1914 before Rovinj on a mine and sank. Find with us your accommodation in Novigrad, one of the most beautiful cities in Istria 50 kilometers north of Rovinj.

Private accommodation in Rovinj and on the Croatian Adriatic coast

Around your apartment in Rovinj you can expect such unique destinations as the Limski Canal, which, with its wooded hills, cliffs and islands, is one of the most beautiful fjords in the Adriatic. The Lim Channel also offers the best conditions for climbers, as well as several natural rock and board trails in Rovinj itself. If you are from Rovinj to your apartment in Pula – Croatia, take the opportunity to make a detour to the nature reserve Palud, a wetland about ten kilometers south of Rovinj. Here, in addition to countless bird species and turtles can be observed. For your onward journey to neighboring Slovenia you will also find an accommodation in Ljubljana and other Slovenian cities.