Well done. Look what authentic hosts in Munich-Milbertshofen are offering to you on 9flats. 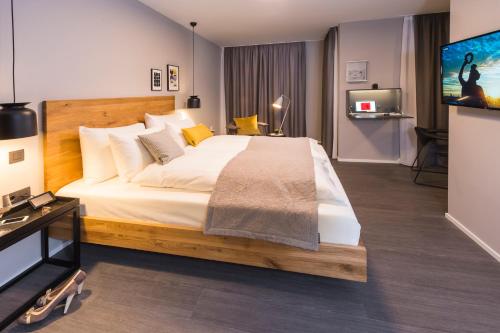 Situated in Munich within 2.4 km of BMW Museum and 2.5 km of BMW Welt, Timehouse Serviced Apartments features accommodation with free WiFi, seating area and a fully-equipped kitchen.Book now
from $137 per night 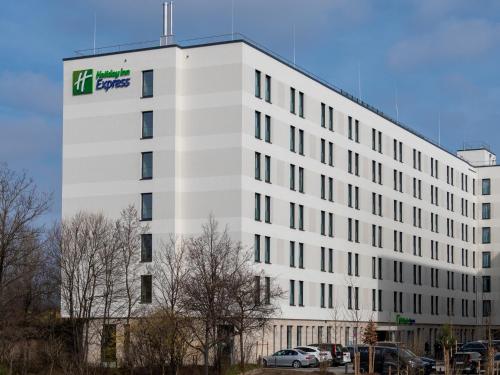 Located in Munich, 3.2 km from MOC München, Holiday Inn Express - MUNICH NORTH, an IHG Hotel provides accommodation with a bar and private parking. Among the facilities at this property are a 24-hour front desk and a business centre, along with free WiFi throughout the property. Guests can have a drink at the snack bar.Book now
from $79 per night Attractively set in the Schwabing-Freimann district of Munich, Hampton By Hilton Munich City North is situated 3.2 km from MOC München, 4.8 km from BMW Museum and 5.9 km from Fröttmaning Underground Station. The property is located 6.7 km from English Garden, 7 km from Olympiapark and 7.1 km from Alte Pinakothek. The property has a fitness centre, free WiFi and a 24-hour front desk.Book now
from $79 per night 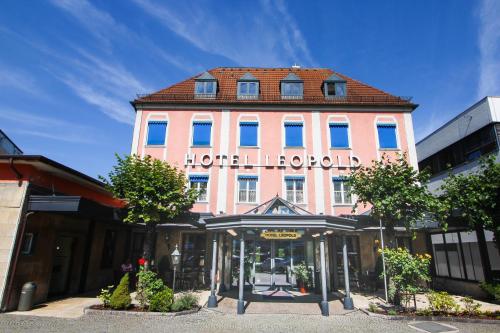 Set in Munich, 2.5 km from English Garden, Hotel Leopold offers accommodation with a bar, private parking, a shared lounge and a garden. Boasting family rooms, this property also provides guests with a terrace. The accommodation provides a concierge service, and luggage storage for guests.Book now
from $79 per night 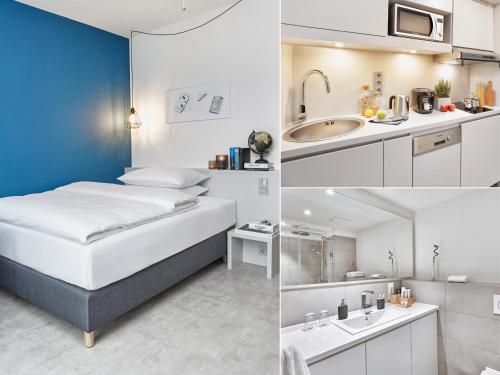 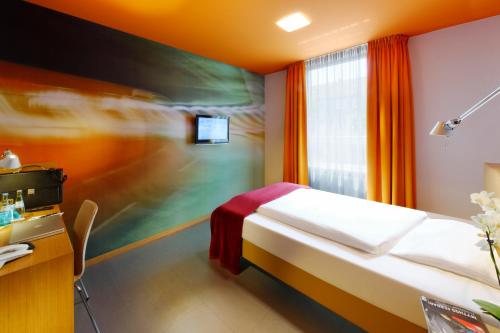 This family-run hotel in the Milbertshofen district of Munich is directly beside the BMW company. It offers modern rooms with Wi-Fi and great underground connections to the city centre.Book now
from $82 per night 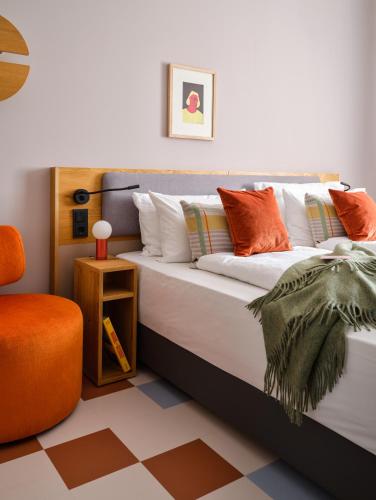 This hotel is located in the Schwabing district of Munich, just 300 metres from Münchner Freiheit Underground Station. It offers a hearty breakfast buffet, air-conditioned rooms and a fitness area.Book now
from $65 per night 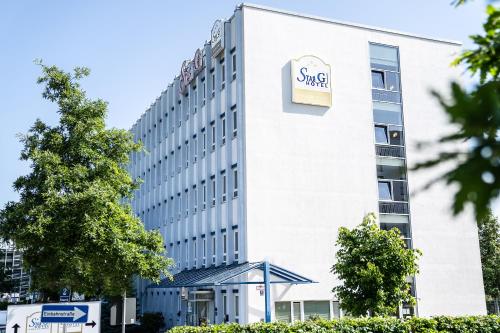 This 3-star hotel is located in Munich’s popular Schwabing district, a 10-minute drive from the city centre. Star G HoteI offers modern rooms and suites and free WiFi.Book now
from $50 per night 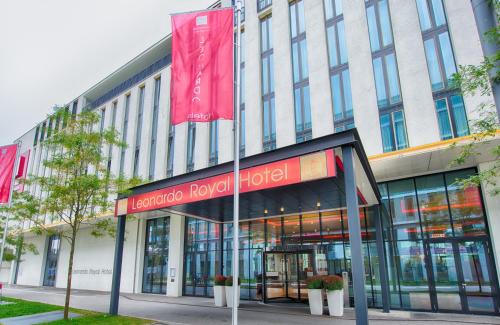 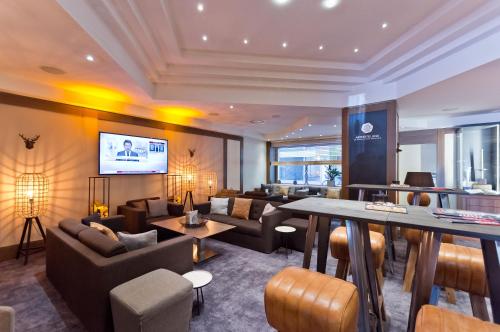 Just a 10-minute walk from the Olympic Stadium and BMW Headquarters, this hotel in Munich's Olympic Village offers great views of the Olympic Park, and soundproofed rooms with flat-screen TV. Free WiFi and 2 computer terminals are offered in the lobby.Book now
from $80 per night 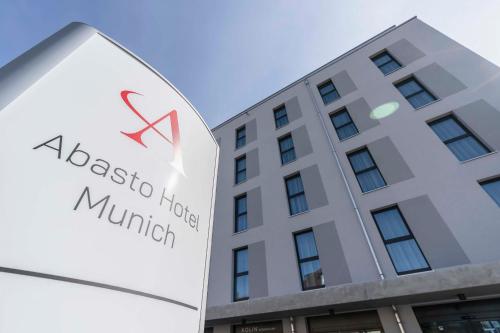 Situated in Munich and with BMW Museum reachable within 4.9 km, Abasto Hotel München Feldmoching features express check-in and check-out, allergy-free rooms, a restaurant, free WiFi throughout the property and a bar. This 3-star hotel offers an ATM and a tour desk. Private parking is available on site.Book now
from $53 per night 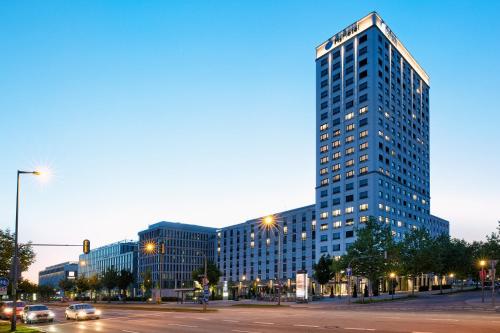 Located in Munich, 1.7 km from BMW Welt, H2 Hotel München Olympiapark offers rooms with air conditioning and free WiFi. Located around 1.7 km from BMW Museum, the hotel is also 2.5 km away from Olympiapark. The property is situated in the Milbertshofen - Am Hart district.Book now
from $70 per night

See all 38 accommodations in Munich-Milbertshofen

Milbertshofen is a residential suburb to the north of Munich centre. The area is well away from the bustle of the city and would suit those who are looking for a vacation rental in Munich with good access to the surrounding countryside and a quieter atmosphere. Your apartment in Milbertshofen is a great way to get to know the area and also the people. In your holiday apartment in Milbertshofen you will be living within the local community, not remote in a tourist hotel. Renting your accommodation in Milbertshofen from 9flats.com provides you with a similarly authentic travel experience but with a far greater degree of privacy and comfort in your own room or apartment.

Enjoying the area from your vacation rental in Milbertshofen

Milbertshofen has good access to some great parks where you can relax after a hard day’s sightseeing. It is also close to the BMW museum. Here you can explore the history of one of the world’s great car makers and enjoy viewing some of their rarest cars. The four cylinders of the BMW head office building also dominate the area and the Allianz Arena is also located in the district. Football fans can enjoy a stadium tour, even if they are unable to catch a Bayern Munich or 1860 Munich game. The vast Olympic Park is also to be found here and Fröttmaning Hill features the Chapel of the Holy Cross, the last remnant of a buried village.

Exploring Munich from your Vacation Rental in Milbertshofen

Munich is a city of parks, castles, palaces, museums and churches. Nymphenburg Palace to the west of the city is one of the main attractions, a splendid baroque building that was once the summer residence of the Bavarian kings. In the city centre, meanwhile, you will find the Residenz, which was the city castle of the same monarchs. Inside you will find an outstanding interior design museum. Around the central Marienplatz you will find the neo-Gothic Rathaus, which still serves as the city’s town hall. Nearby is the famous Frauenkirche, with its towers topped by onion domes. Together with the church of St Peter, a climb to the top offers some of the best views in the city.

Not far from Milbertshofen, an apartment in Schwabing is also in the north of the city. This is one of Munich’s most upmarket residential area but also one of the most bohemian. The area was originally a separate village and dates from the 8th century, making it older than Munich itself. It became popular in the 19th century with intellectuals, writers and artists and still maintains some of that atmosphere today. There are lots of good bars and restaurants and some fine boutiques along the main streets. Whether you prefer to be central or in the suburbs, you will find the best accommodation right here at 9flats.com, so book your Munich apartment now for a great rental deal.

Latest reviews for places in Munich-Milbertshofen