Well done. Look what authentic hosts in Canton of Berne are offering to you on 9flats.

Popular accommodations in Canton of Berne 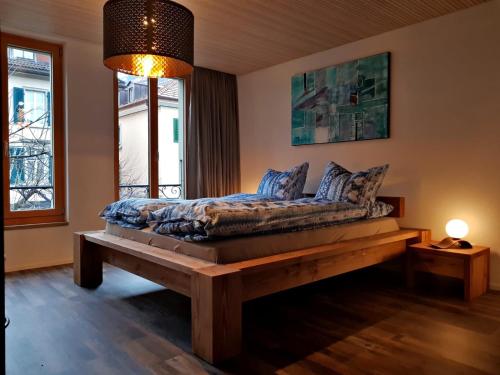 Offering free WiFi and mountain views, Churchstreet appartements is an accommodation located in Meiringen. Featuring free private parking, the apartment is in an area where guests can engage in activities such as skiing and cycling.Book now
from $83 per night 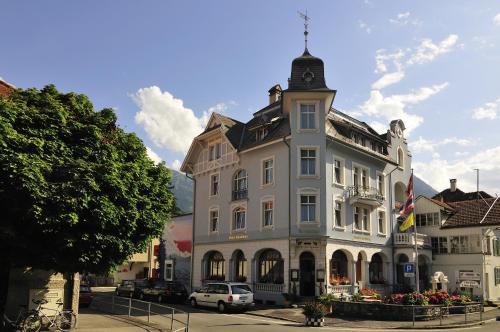 The small Hotel Lötschberg enjoys a quiet location in the centre of Interlaken, only a 3-minute walk from the Interlaken West Train Station.Book now
from $83 per night 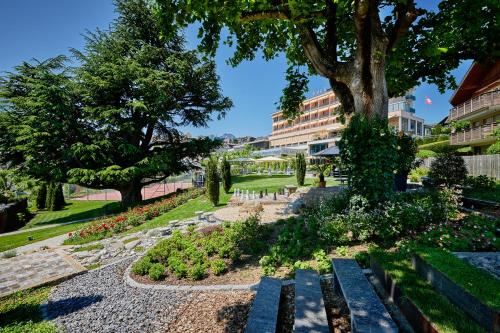 Enjoy the view of the most beautiful bay in Europe and the mountains of the Jungfrau region during
your stay at Eden Spiez. From the balcony of each of our 45 individually designed rooms you will
catch a view of the picturesque Spiez Castle, the village centre, the breath-taking panorama of the
Bernese Oberland mountains and of Lake Thun. Our hotel is only a 10-minute walk from the railway
station, a 5-minute drive from the motorway and a few minutes' walk from the Spiez boat station.Book now
from $83 per night 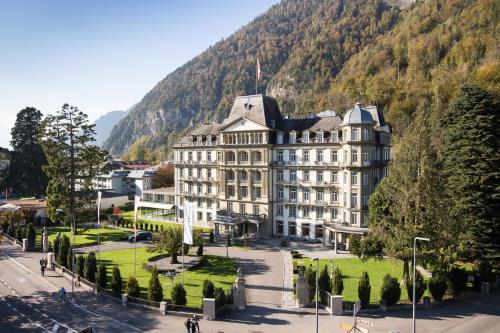 Situated 5 minutes' walk from the Interlaken Ost train station and boasting views of the Swiss Alps, the Lindner Grand Hotel Beau Rivage features an indoor pool and a restaurant. Free WiFi is available in all areas.Book now
from $83 per night 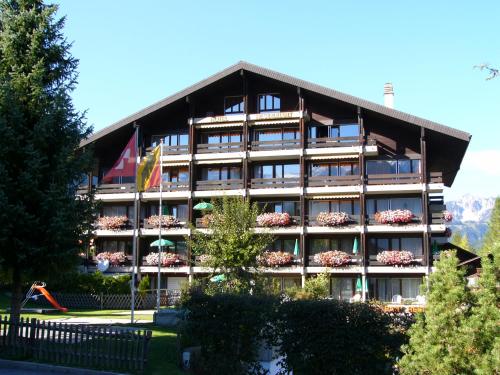 The chalet-style, family-run Alpen Hotel Residence is located in quiet surroundings in the Simmental valley, only a 3-minute walk from the centre of Lenk and 200 metres from the train station. Free parking is available on site.Book now
from $97 per night 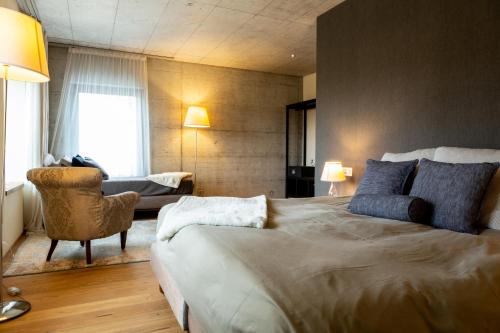 Hotel de l’Ours Preles features a restaurant, bar, a shared lounge and garden in Prêles. Featuring family rooms, this property also provides guests with a terrace. The accommodation provides room service, an ATM and luggage storage for guests.Book now
from $83 per night 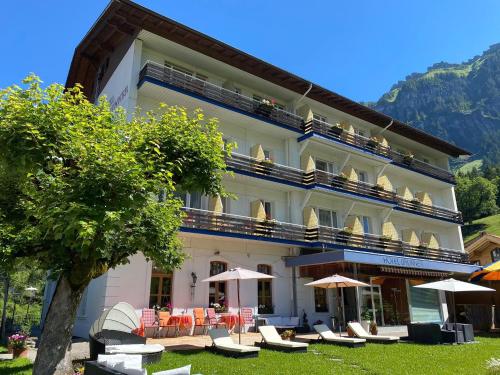 Located in the car-free village of Wengen, a 7-minute walk from the train station, the Hotel Residence Brunner offers ski-to-door access, as well as panoramic views of the Jungfrau Massif and the surrounding mountains. Free WiFi is provided in the entire property which was partially renovated in 2013.Book now
from $90 per night 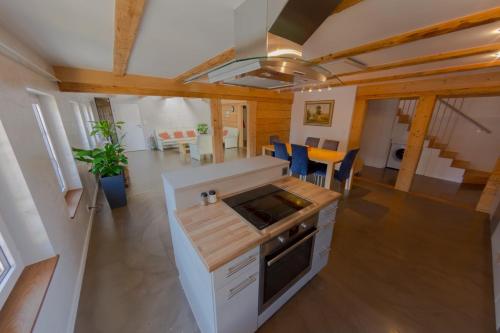 Chalet 1752 is set in Ringgenberg and offers a terrace. The accommodation is 21 km from Thun, and guests benefit from private parking available on site and free WiFi.Book now
from $83 per night 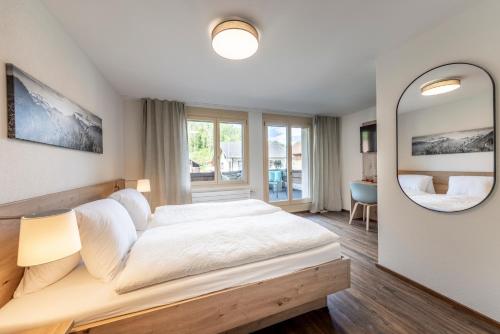 Hotel Restaurant Urweide can be found in the village of Innertkirchen in the Bernese Oberland region in the heart of Switzerland. Family-run since 5 generations, the hotel offers you functionally furnished rooms and traditional Swiss cuisine.Book now
from $83 per night

Built in typical Swiss chalet style and a 10-minute walk from the centre of Interlaken, the traditional Hotel Sonne Interlaken-Matten offers en-suite rooms with cable TV and a tea/coffee maker. The accommodation also offers free WiFi and free public parking.Book now
from $110 per night 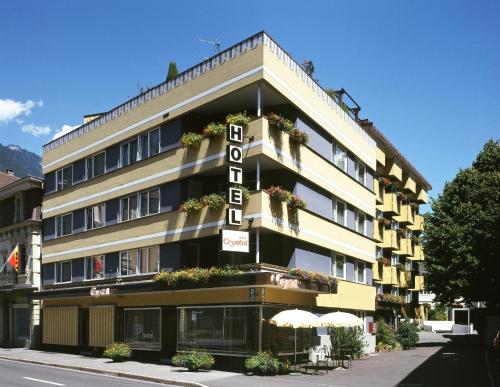 Offering free WiFi, the Crystal is just a 5-minute walk from the centre of Interlaken and the Interlaken-West Train Station. Rooms feature cable TV, a safe, and a bathroom with a hairdryer.Book now
from $83 per night

The traditional Hotel Krebs is located in the centre of Interlaken, close to the western train station. The lobby features an internet terminal and free wireless internet access.Book now
from $83 per night

See all 2891 accommodations in Canton of Berne

Information about Canton of Berne

Apartments in the Canton of Berne are highly sought after, as the region is one of the most beautiful in Switzerland and attracts visitors from all over the world all year round. Thus, one can not only hike, climb or cycle here, but also visit many interesting cities or simply relax at one of the fairytale-like lakes and unwind. Ski enthusiasts also book apartments in the canton of Berne, as the Bernese Oberland is famous for its sensational pistes and superbly prepared cross-country ski runs that promise great winter holidays. Take a quick look around; we can arrange many holiday apartments in the canton of Berne, but they are always quite well booked, because compared to couchsurfing in the canton of Berne, you get a lot of privacy and freedom at a good price. Our apartments are provided by private individuals, who will of course be happy to help you if you want to get to know a great restaurant or find out where the best places to see are. For example, if you take an Apartment in Bern, you live in the canton capital. Private holiday apartments in Belp are just a few kilometres outside. If you choose Accommodation in Spiez, you live directly on Lake Thun.

Cosy apartments in the canton of Berne, the Swiss holiday highlight

The Canton of Bern is very easy to reach by car if you want to be flexible during your stay and want to explore the area extensively. After all, the canton has an area of almost 6,000 km² and offers enough variety for a sensational holiday. There are even world-class mountains here, as UNESCO has designated the mountain region around Jungfrau, Eiger and Mönch as a World Natural Heritage Site. Your apartment in the Canton of Berne is the best base for discovering the Bernese Oberland. The highest elevation is the “Finsteraahrhorn”, which rises 4,272 metres above the surrounding area; the lowest point at 401 metres near Wynau is the Aare, the largest tributary of the Rhine. Lake Thun and Lake Brienz offer great panoramas: here you can swim and spend relaxing hours under palm trees before setting out for rafting on one of the numerous rivers. Make sure you make a detour to the Emmental, famous for its cheese. Many show cheese dairies give you the opportunity to watch how the delicious cheese is made. But don’t forget your camera, after all, you’re in a really picturesque area, dominated by large farms and idyllic villages.

The Bernese Oberland attracts visitors with cosy private holiday apartments in the Canton of Berne.

A city that you should definitely visit from your private holiday home in the Canton of Berne is the Federal City of Berne. It was founded by the Zähringers in 1191 and achieved the status of a free imperial city as early as 1218. The old town with its characteristic arcades was included in the UNESCO World Heritage List in 1983. But Bern is not only “pure history”, it is also a modern city of art and culture with numerous museums, galleries, studios and theatres. Top-class concerts and sporting events take place here. On your way back, would you like to watch another musical? What do you think of an Apartment in Stuttgart?

Latest reviews for places in Canton of Berne