Well done. Look what authentic hosts in New York City-Little Germany are offering to you on 9flats. 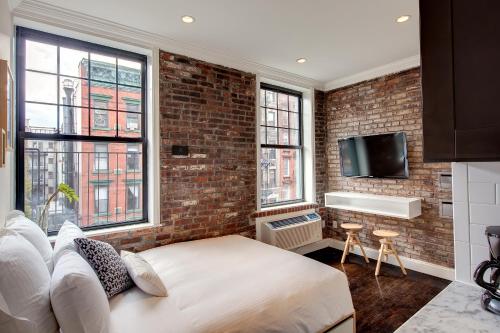 Located in Manhattan’s East Village, this hotel is surrounded by restaurants, bars, and night life. The studio apartments boast free Wi-Fi access and a kitchenette.Book now
from $80 per night

Little Germany is the colloquial name given to the area of Lower East Side Manhattan in New York that became popular with German immigrants in the 19th century. The neighbourhood has had a troubled past, as various immigrant communities struggled to adapt to each other’s customs and traditions over the years. However, the area’s lowest point came in 1904, when the General Slocum disaster wiped out a huge section of the community. The area is now a vibrant and modern area of the city, and you can experience it first-hand by making a holiday home from 9flats your luxurious base for the duration of your stay.

A poignant reminder of this area’s deprived and turbulent past is provided by the Lower East Side Tenement Museum. A series of exhibits and local artefacts chart the area’s struggle during the late 19th and early 20th centuries. This part of Manhattan also has a strong Jewish presence, and visitors can take a glimpse into its past with a visit to the Museum at Eldridge Street Synagogue. Not only are visitors treated to a tour of the Synagogue, they are taken on a journey into the history of Jewish settlers in the city and the wider United States. There are also informative film screenings and walking tours of the neighbourhood available. This neighbourhood was once one of the city’s most deprived areas, but it is now blessed with a cultural richness that makes it one of the city’s most interesting areas. Renting a holiday apartment in New York from 9flats will not only put you within walking distance of the district’s attractions, it will provide you with a luxurious holiday home – a refuge from the huge crowds of tourists that descend on the city’s streets every day.

Whilst there are a number of chic art galleries and museums in the district, the New Museum on Bowery is one of the most popular. Featuring a selection of contemporary art from around the world, the museum also has a great bookshop and the Sky Room with excellent views of the city. The Kehila Kedosha Janina Museum charts the history of Greek Jews, and it is located in the western hemisphere’s only Romaniote Synagogue. A relatively new and innovative attraction in the area is the Lower East Side Cell Phone Tour. Visitors can download a map of the tour from the Internet, and dialling specific numbers at various locations will provide some detailed narration on the immediate area and its history. With a strong and proud history of immigration, this area of New York has a very special sense of community, and private holiday accommodation in Alphabet City will allow you to truly become part of that community – if only for a few days.

The New and Luxurious Alternative to Couchsurfing in Little Germany

Couchsurfing gives travellers the chance to live as part of local communities, often at a fraction of the cost of a local hotel. The service provided by 9flats is similar to the couchsurfing phenomenon, but it also allows you to live in luxury – without the need to share your personal space with fellow travellers.